Keywords: Revolution in the Kingdom of the two Sicilies (1820-1821); Conspiracies and Secret Societies; France of the Charte; Restoration and Revolutions; Mediterranean.

On 27th April 1821, at the end of a journey begun in Naples in early March, Jacques-Henri Robilliard and Hercule Ronquetti arrived in Paris. The two held in their possession a precious certificate in which the French diplomatic representative in Naples acknowledged that they had provided good service to France and, therefore, deserved a reward from and protection by Louis XVIII's government. In Naples, a city which had been undergoing the revolution that transformed the Kingdom of the Two Sicilies into a constitutional monarchy, Robilliard and Ronquetti discovered the existence of a conspiracy plotted by French and Polish soldiers supported by the local revolutionary milieu. The conspirators wanted to hoist the tricolour flag on one of the French ships in the roadstead of Naples and sail towards southern France. Here, they thought, a revolt would be able to spread throughout the country and re-establish the 1793 republic. Building on this case study, this article proposes an investigation of French foreign policy regarding the Revolution of 1820-1821 in the Kingdom of the Two Sicilies: confronted with the diplomatic and military leadership of Austria, the monarchy of the Charte showed the limits of its geopolitical ambitions in Mediterranean Europe. Based on documents mostly kept in French archives, the analysis works on different scales, examining relationships among States in their interaction with the level of control and repression of the radical political environments that stood against the order of Restoration Europe. 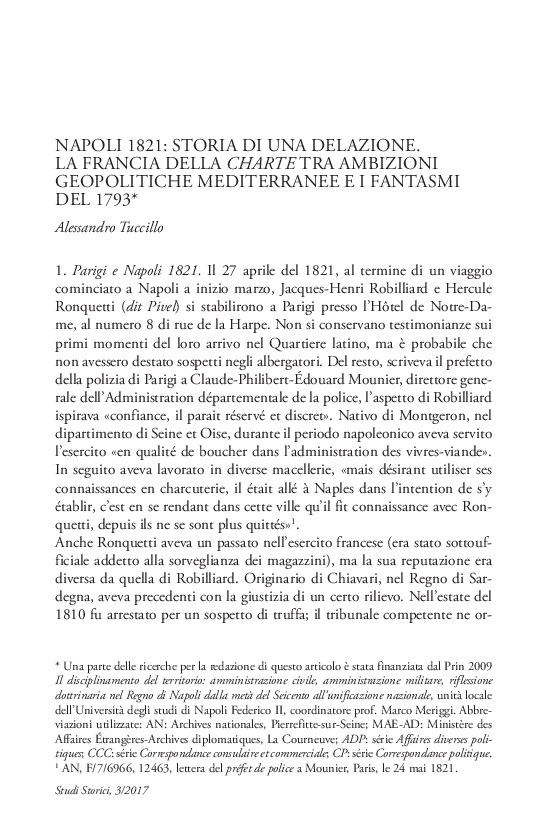