During the fourteenth century, in a context marked by the overwhelming success of lordships, intellectuals of different backgrounds (jurists, literati, politicians), all linked to the urban environment of Central Italy, introduced into political thought the possibility of actively opposing tyranny, to the point of theorizing tyrannicide by reclaiming - also through John of Salisbury's "Policraticus" - the arguments of the great classical theorists on civil and republican virtues (Cicero and Seneca). Among the reflections on the possibility of rebelling against tyrants, marked by the contrasting positions of the great jurists of the time, Bartolo da Sassoferrato and Luca da Penne, there emerged the opinion of Boccaccio, who, unlike Petrarch, categorically condemned the seigniorial regimes which tended by their very nature to become tyrannies, and explicitly justified tyrannicide. In this way, Boccaccio displayed a conscious adhesion to the Guelph and Republican politico-cultural camp, which was firmly anchored in the defense of "florentina libertas" and intolerance toward Visconti expansionism. But at the same time he displayed his aversion to the corruption of oligarchic power and the rise of domestic tyrants, adhering to the roots of a republican tradition of thought that would find an echo over the centuries in so many Florentine intellectuals involved in governing the "res publica" and opposing the Medici power structure. 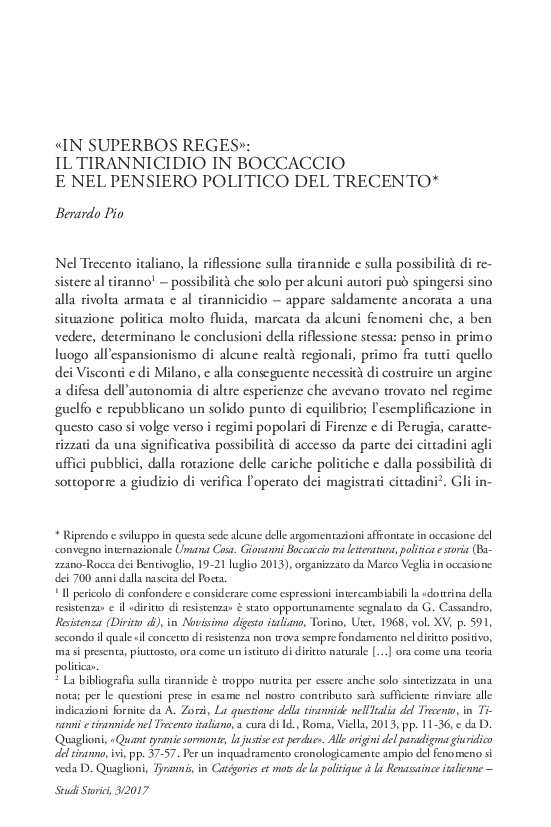