This article aims to summarize the events of the RSI Federation of Fighters (FNCRSI) from its inception in 1947 until 1963, the year of its definitive break with the MSI and its retreat to associative purposes only. The FNCRSI was created to reunite and give assistance to the ex-servicemen of the so-called «social republic», whose entry into other veterans' associations was formally forbidden; but above all, it represented an element of persistence of the ideological aims of the fascist «republic». Rejecting the depoliticization of the RSI often promoted by the MSI, the FNCRSI claimed, to the contrary, its status as ally of Nazi Germany, with which it fully shared the racial objectives within the framework of the pan- European racial patriotism characteristic of full-fledged collaboration. During the 1950s, the FNCRSI gradually but inexorably moved away from the party due to the party's «compromise» with the democratic-parliamentary system: a very intense political confrontation emerged, which saw the centre-stage involvement of Junio Valerio Borghese, a «hero» among neo-fascist veterans and former commander of the infamous X Mas (earlier, Rodolfo Graziani had also been its president, until his death in 1955). Borghese in fact attempted to use the FNCRSI as a political platform to maintain his influence over the MSI, with which he often had conflicting relations. But the political ambitions of the «black prince» clashed with the intransigence of the association, in particular the Milanese federation, leading to the breakup of October 1962. 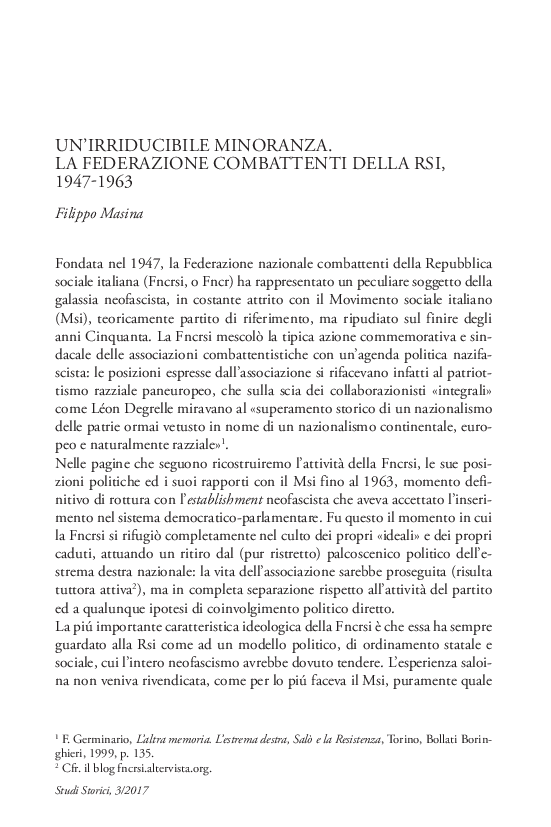