Since the Cornaro chapel in Santa Maria della Vittoria was inaugurated in 1652, the Santa Teresa by Bernini, represented in the supreme experience of "transverberatio", it keeps drawing the attention of a universal audience. As suggested by the chapel view attributed to Guidobaldo Abbatini, the sculpture has to be viewed from far away. The sculptor, like Teresa in the story of her mystic life, doesn't miss anything of the sensational encounter, putting it far enough so the spectator cannot really say what is happening. The images of Teresa's face, spread out and published insistently since the beginning of the 20th century, show the will to overcome that boundary to the visible and the intelligible that the Baroque mentality of Bernini had set. Starting from St. Teresa, and bearing in mind the interpretation offered by Bernini, the psychoanalysis, from Mary Bonaparte to Jacques Lacan, wondered about the nature of that feminine "jouissance". In 1957, Georges Bataille also included The St. Teresa as an illustration in his essay "L'Érotisme". The essay, that gathers the most significant opinions on the Bernini's sculpture, also investigates on the contribution that the psychoanalysis and its language can offer to the comprehension and to the critic of this masterpiece. 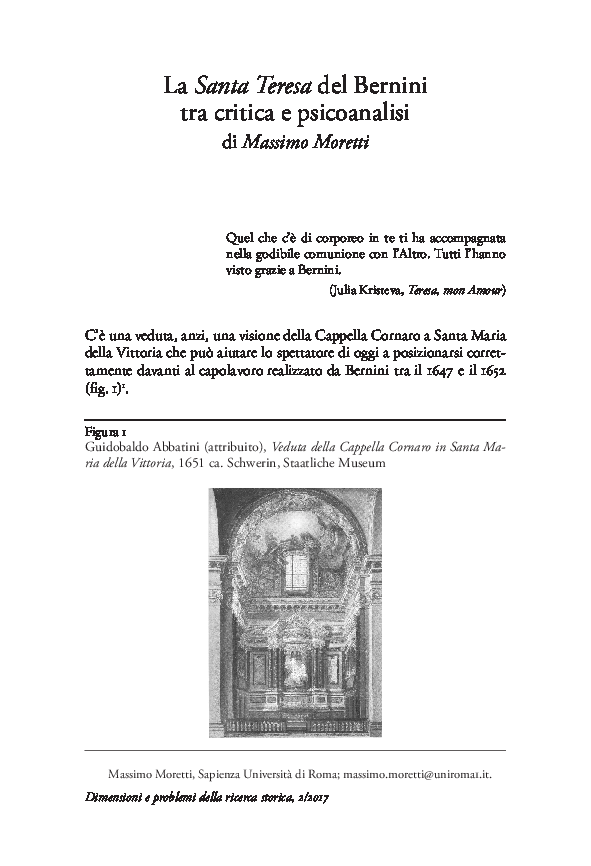