The investigation is framed in the tradition of social representations. Using free associations, it has a focus on content and processual aspects, and on the role of the linguistic behavior. In particular, it has brought attention to the representational processes, triggered by abstract stimulus-words (politics and elections) vs. concrete stimulus-words (berlusconi, veltroni, politicians, voters), in young university students of different political orientation interviewed during the 2008 election campaign. According to the literature we expected to find significant differences among the voters of the two opposing camps: on the left with more abstract words-stimulus and associations, on the right with more concrete words-stimulus and associations. Survey participants were 202 students of Psicologia2 Sapienza University of Rome. Textual data, word-stimulus and associations, and extra-textual data, the categorical variable â€œpolitical orientationâ€, were treated with different steps of the spad-t for the analysis of the vocabulary, the latent dimensions, and stimulus-words and associations that characterize the political space of five groups: left, center-left, center, center-right, right. For the analysis of latent dimensions, two factors plaining the 46,36% of the total variance were extracted. The first factor highlights the role of political orientation, polarized between the center-right vs. left, the second factor shows the role of political style, polarized between radical (right and left) vs. moderate (center-left). In both cases, specific lexicographic units characterize the factors. Also the stimulus-words and associations that characterize the five political groups show clear differences. The initial hypothesis is not confirmed because the abstractness of the words-stimulus only features more clearly the radical political style, both of right and left, while in all other cases we see a relative balance between abstractness/concreteness of the stimuli and related associations. The results are also discussed in relation to the positive/negative associations going to delineate ambivalent representations of politics and elections, confirming the results of previous investigations. 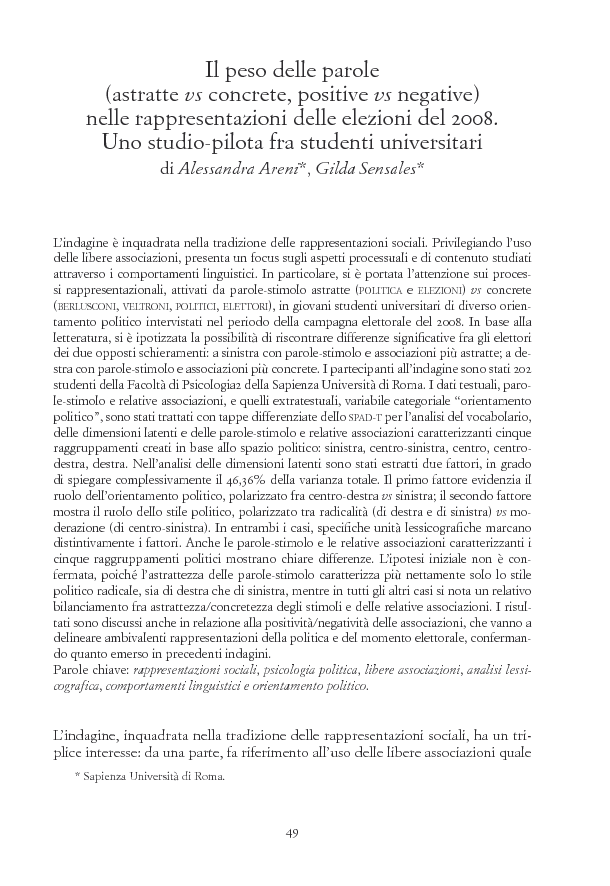