The article presents a comparative examination of the idea of crisis in the thinking of two psychologists who were both eminent in their respective countries: Francesco De Sarlo and Karl Bühler. Both of them influenced by Franz Brentano, and both with a very similar biographical and intellectual itinerary, they wrote works that in large part converged in the diagnosis and therapy of the situation that was considered "critical". De Sarlo in 1914 identified the cause of psychology's state of crisis in the lack of a scientific statute shared among the various research trends present at the time, that is to say - as he writes - those of consciousness introspection, of objectivism, and of the psychoanalytic orientation. Analogously, in 1926 Bühler too observed a situation of great uncertainty and difficulty, determined not by a lack of productivity, but paradoxically by a multiplicity of trends and an abundance of scientific results; a situation that made it necessary to reorganize the scientific statute of psychology by integrating the three aspects/objects considered by him to constitute mental life: inner introspective experience, externally observable behavior, and the products of the mind that had become common culture. The therapy for overcoming the crisis was then identified by both of them in the construction of new epistemological foundations, of a single "axiomatic" related to the object, the methods, and the basic principles of the discipline, capable of combining in a unitary way the diverse research trends: an accomplishment that they considered possible by resorting to philosophical thought. However, while De Sarlo, taken up above all by overcoming the limits of the Wundtian elementist and associationist psychology in favor of a phenomenological and functional psychology of a Brentanian kind, appealed to unspecified "guidelines of a philosophical nature," Bühler instead, concerned about integrating his three basic aspects/objects, appealed to a "transcendental deduction" of a Kantian kind, already utilized with success in establishing the bases for a theory of language. Lastly, the thinking of the two authors concerning psychology-philosophy relations is compared with that of other Italian psychologists. 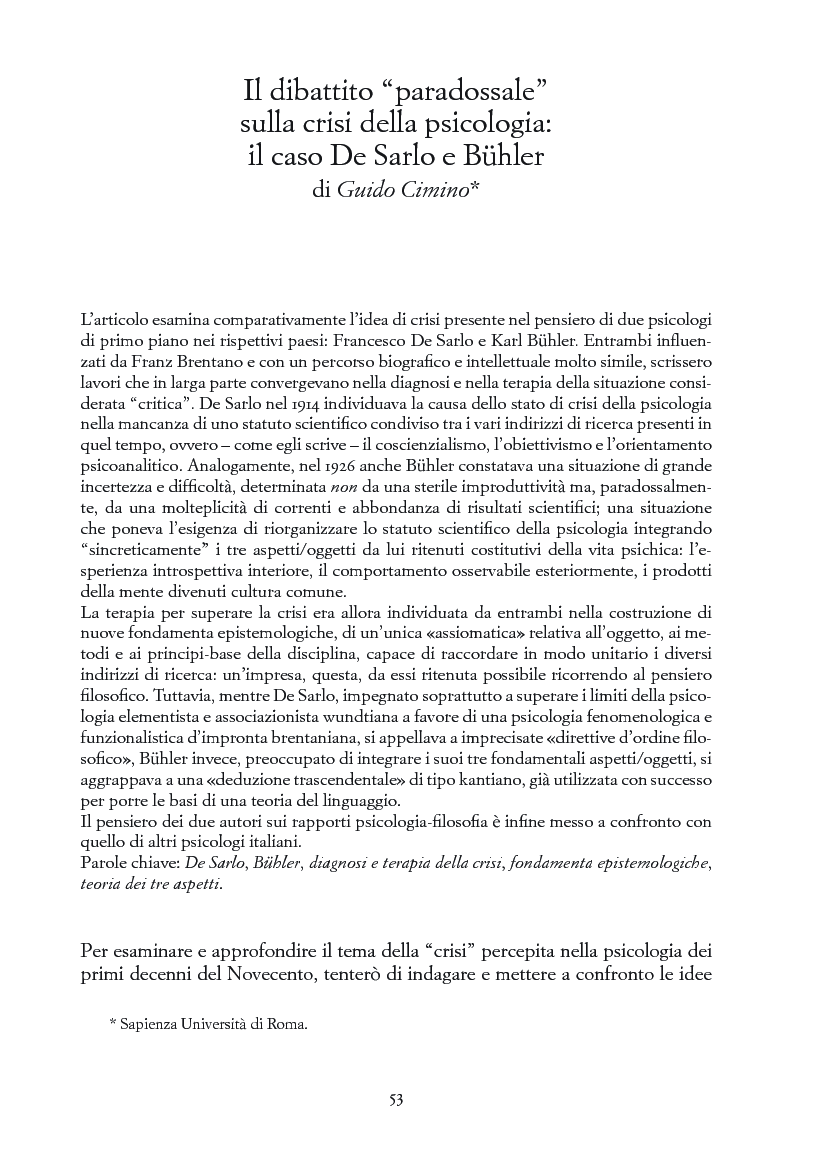