The article tackles the theme of the balances of power among various “social fieldsµ (Bourdieu, 2009; 2017) and among various disciplines (Foucault, 1974) in the symbolic battle for the definition of the Mafia phenomenon, enquiring how the definition provided by the law (transferred to the penal code by means of article 416-bis) and/ or applied in the judicial praxis avails itself of the contributions of other doctrines, and in which way instances, rhetoric and methods used by different types of expert knowledge (sociology, history, psychology, economics, etc) are “translatedµ into the logics of the juridical field. By recognising the performative value of the law (Derrida, 2003) and its “partialµ dimension in tracing the boundaries between licit and illicit (Ferrajoli, 2004) and by questioning “ingenuous intuitions of equityµ and super partes apodictic statements of scientificity claimed by the juridical field, this contribution analyses ways and effects of these “contaminationsµ; “field invasionsµ through which hybrid definitions of the Mafia phenomenon are produced, often claimed as “abstractµ and self-founded. By employing the perspective used by the critical sociology, of law the paper makes use of the juridical discourse on 416-bis as a privileged prism to observe the ways in which the “pragmatic content of the matters of power and authorityµ is translated into those of “imputation and responsibilityµ, highlighting the contradictions between penal law on paper and penal law “in actionµ. Starting from the rhetoric and the narrations of the sentences belonging to a number of important trials (from the so-called “Mafia Capitaleµ to the “Trattativaµ trials, from the one against president Salvatore Cuffaro to the trials about the massacres of Capaci and via D’Amelio), it highlights the political dimension of the clash and its echoes within the mediatic system, underlining how the symbolic force and the performative effects of the prevailing definition weigh not only on the future of the understanding of the Mafia phenomenon, but also of the normative policies and actions for its contrast. 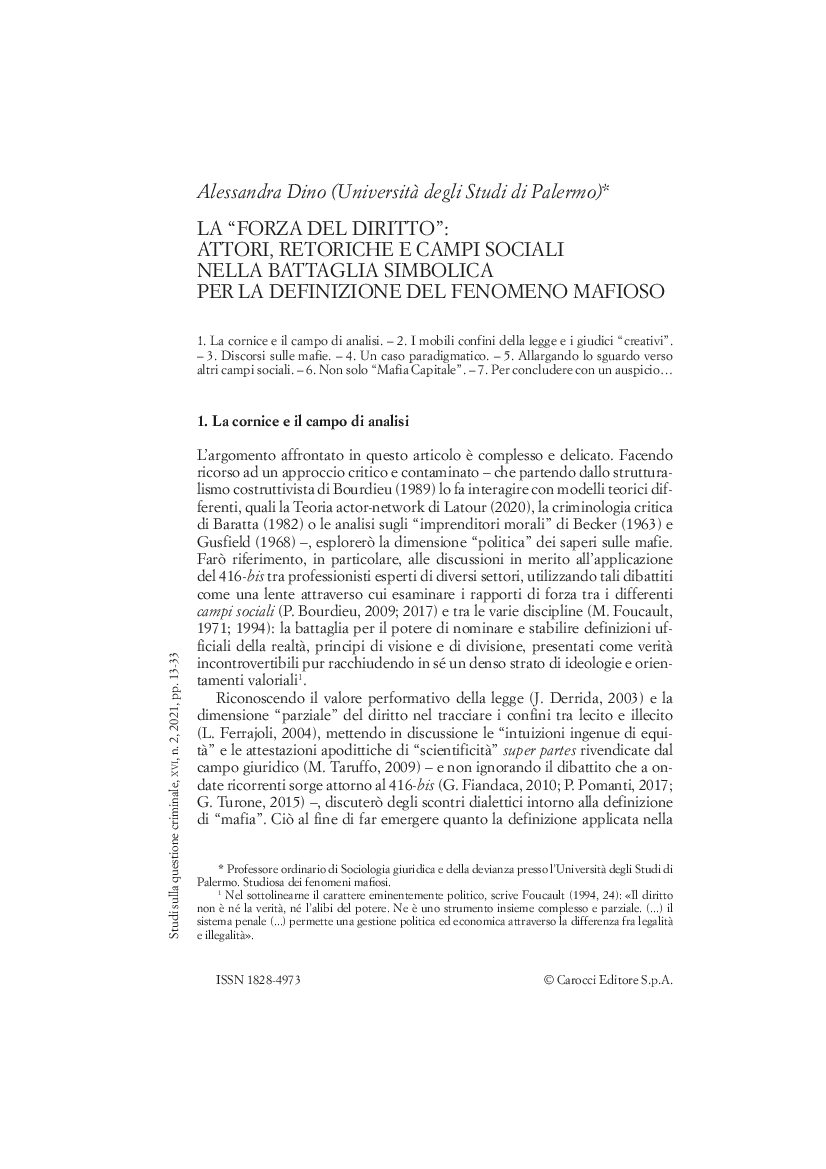