This paper analyses legal regulations and practices concerning ordinary naturalisation in Italy i.e. the access to Italian citizenship through long-term residence by non-EU nationals. The analysis address the 91/1992 Act from the point of view of its implementation and the conflicts it generates. The focus is on the rich - yet not sufficiently studied - case law produced by administrative courts while dealing with "failed citizens". As the law does not provide detailed naturalisation requirements, besides the ten years' legal residence in the country, the courts have played a key role in defining who deserves to become Italian citizen and who does not, and why. The key hypothesis of the paper is that 'concession' of Italian citizenship functions as a 'governmental dispositif'. The main effect of the procedure, ruled by the Ministry of Interiors, is to accept in the political community only those immigrants who correspond to the model of the 'good' or 'perfect citizen'. Citizenship becomes therefore the reward for an "accomplished integration" according to high standards. Michel Foucault's "governmentality", Abdelmalek Sayad's "State thought" and Bridget Anderson's "super citizenship" and national community as "community of value" provide the theoretical bases for the research. Against this background, the act of naturalisation will be seen as an ambivalent act of sovereignty, through which the State reaffirms the 'nation' as unique political community, while restricting its power to expel foreigners transformed into citizens. Procedures of naturalisation will be assessed in terms of discretional administrative powers, police knowledge and actuarial techniques of risk prevention. Conduct and revenue requirements for naturalisation will be interpreted as expressions of an ideal citizenry, made of highly moral and law abiding individuals and by net fiscal contributors. 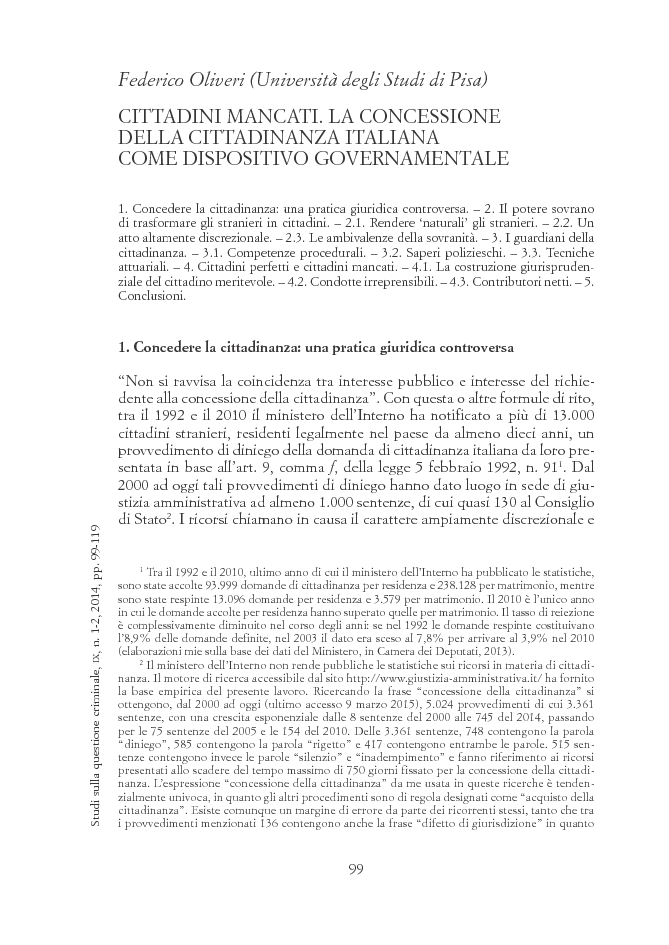