The essay, which is based on unpublished documents for the years 1946-1948, retraces the crucial stages of Boni's political and trade union experience. His interpretation of the trade union action is linked to his anti-fascism, which he experienced to the full within the Italian resistance movement. His reformism, looking at the international context, opposed ideological dogmas and the dependence of the trade union upon political parties, including the Italian Socialist Party (PSI). He did not avoid somehow harsh contrasts with communists, but refused the idea of a socialist trade union, which in his opinion would weaken the principle of union unity with the Italian Confederation of Workers' Trade Unions (CISL) and the Italian Labour Union (UIL). He worked side by side with Di Vittorio, Lizzadri, Santi, Brodolini, Trentin, De Martino, and Lama, the communist trade unionist whose way of interpreting union disputes and social struggles was closest to Boni's. He studied with passion and accuracy the history of the Federation of Employees and Workers in the Metalworking Industry (FIOM) and the reestablishment of the Italian General Confederation of Labour (CGIL). His role as a university lecturer and President of Fondazione Giacomo Brodolini bears witness to the fact that his will to rebuild never declined, and that Boni, being aware of the fundamental changes occurred in the labour world, strove up until the end of his life for the values he had believed in since his participation in the Italian resistance movement: freedom, autonomy, and unity. 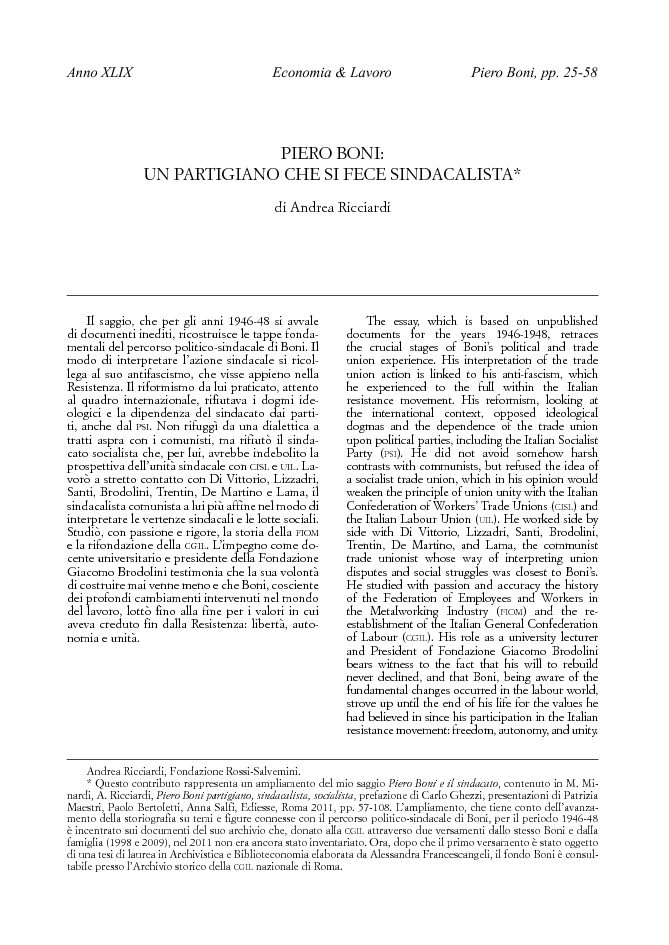