The Ikoots (Huave) of San Mateo del Mar feature an extended repertory of ceremonial orations performed in their religious and civil rituals, called mipoch Dios (lit. 'his word God', i.e. God's words) mostly in ombeayiüts ('our tongue', i.e. Huave) language. Among these the 'Turtle's song' (miverso poj 'its sound turtle', in ombeayiüts) was performed during Whitsunday, and had an overwhelming relevance in the cycle of rituals performed to propitiate rain along Corpus Christi celebrations. This paper focusses on the textual analysis of one version of miverso poj (tape-recorded in 1963) and on the linguistic and rhetoric devices enacted in it, aiming at ritual efficacy, rather than on possible symbolic meanings of the ritual, which since 1975 was not performed any more. This type of analysis allowed three interpretative levels: the first one bridging ideological and pragmatic meanings expressed by the Ikoots ritual action and those derived from the Catholic liturgy, introduced by Dominican Missionaries since the second half of the 16th century. The second explores symbolic and practical meanings of ritual action, together with the meaning of the space-temporal context in which both action and audience are situated. The third faces the role of morphological, rhetorical and poetic tools enhanced to stress the different steps of ritual action, but even more so, to make the whole ritual performance more effective. 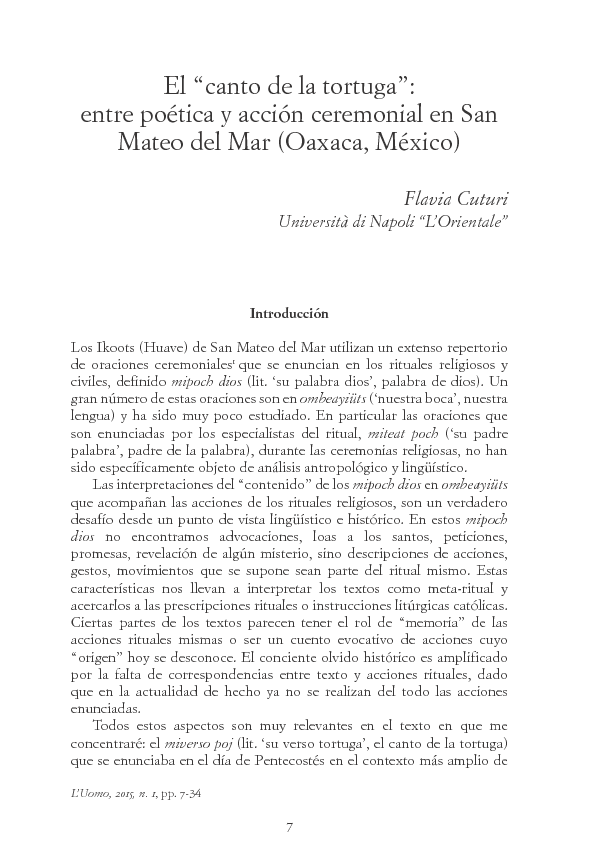