The authors aim to study the determinants and the wage effects of overeducation and overskilling among Italian pre-reform graduates in 2005. In the available data (AlmaLaurea data base). the former happens when the degree was not used to get the current job and the latter when competences acquired are not used in the current job. Overeducation and overskilling persist also 5 years after degree with shares equal to 11,4 and 8%. The fields of study more frequently associated to overeducation and overskilling are degrees in arts, but also such degrees in science as Geology and Biology. The quality of university education, the length of studies and the post-degree training highly affect the probability of overeducation/overskilling. This suggests that in the Italian case overeducation depends not only on low demand for skills, but also on a tertiary education not adequately oriented towards building skills immediately exploitable on the labour market. The non-conditional wage penalty associated to overeducation fluctuates between 20 and 25%, while the one associated to overskilling between 16 and 21%. Once controlling for the observed characteristics of the graduates, the wage penalty falls down to 12% for overeducation and 7% for overskilling. The Heckit estimate with correction for sample selection bias involves an increase by slightly more than 1% of the wage penalty implying that, as hypothesized in the job competition and the job assignment models, unemployed graduates are less skilled than employed ones and would therefore be more likely overeducated/overskilled if employed. 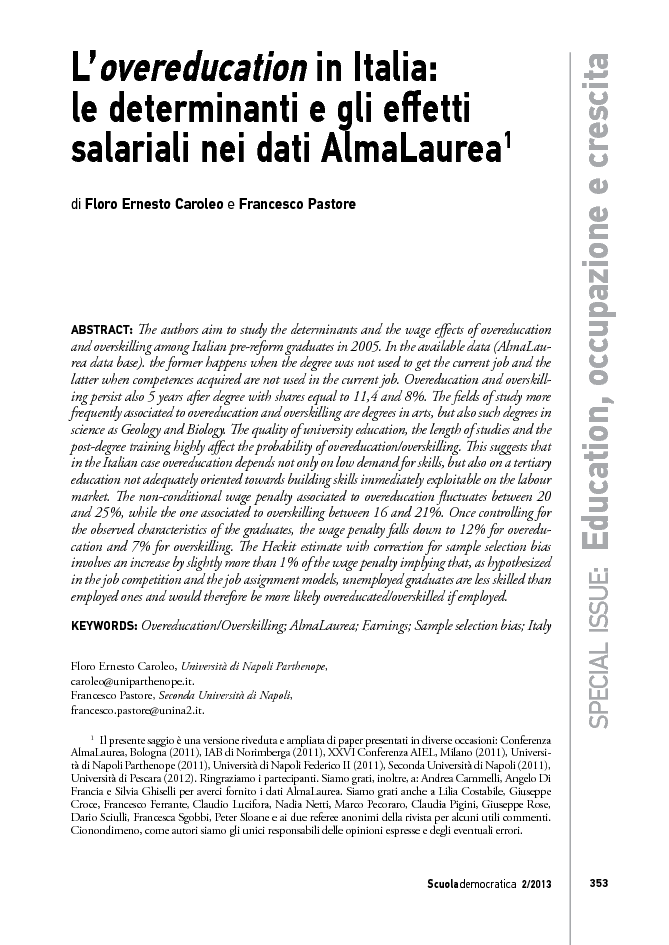