Until his death, that happened in April 1944, Giovanni Gentile would have liked to complete his "History of Italian Philosophy". He had been attending at this work in the first decade of the 20th century, mostly during his time in Neaples (1901-1906) and when he was called as a Professor for the History of Philosophy at the University of Palermo (1906-1913). Though Gentile had already published a number of studies on Italian contemporary Thinkers from the end of his higher education at the Scuola Normale Superiore in Pisa, while in 1904 he started with a new research on Giordano Bruno and the age of Italian Renaissance, he could not have finished a book, which was intended to outline an original reconstruction of an Italian tradition in Philosophy. Only a part of the work - that concerning the origin of Italian Thought from late Scholastic and Dante running throughout Francesco Petrarca and Umanismus to Lorenzo Valla - was published between 1904- 1915 on six issues titled "La filosofia", appeared in the series "Storia dei generi letterari italiani" by Vallardi (and as uncompleted "opus postumum" with the title "Storia della filosofia italiana fino a Lorenzo Valla", in 1962 and 1969). The article is divided into two parts. The first one briefly outlines both, internal and external circumstances related to the process of composing and publishing the work "La filosofia" on separate issues. The second part aims to fix a better date for the different issues. On the basis of the work she is conducting in the Italian edition of the "Correspondence" between Croce and Gentile, the author suggests new minute proofs able to authorize a more linear perspective for the last composition and publication Gentile's third and fourth issues, in the year 1905. 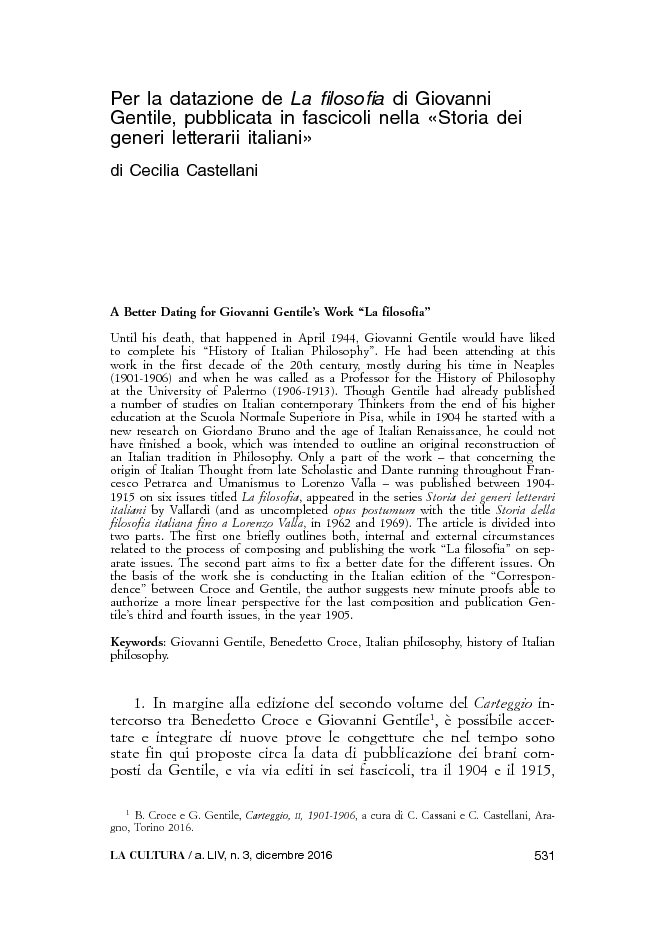