The purpose of this essay is to demonstrate the influence of Frazer's thinking on the genesis of Freudian psychoanalysis. The author of "The Golden Bough", today often regarded as an example of a faded Victorian anthropology, was in fact a humanist with an intellectual foundation similar to that of the younger Viennese physician. Freud actually considered Frazer his immediate predecessor because he had chosen mythology as a cultural instrument with which explore the psyche of the human species: eventually the Underworld of the myth became the dark transfiguration of the sphere of the unconscious, and the treacherous river Acheron represented the obstacle to be overcome in order to penetrate in the world below. The philosopher Wittgenstein expressed his criticism for both Freud and Frazer and, in doing so, confirmed the existence of a deep affinity between the two authors. Hopefully, a study of the elements of Frazer's thinking with respect to the Freudian conception will help us to better understand some aspects and implications of psychoanalysis, and perhaps, at the same time, also allow us to verify that the work of Frazer holds a wealth of knowledge and a creative catalyst still useful for understanding the human imagination. 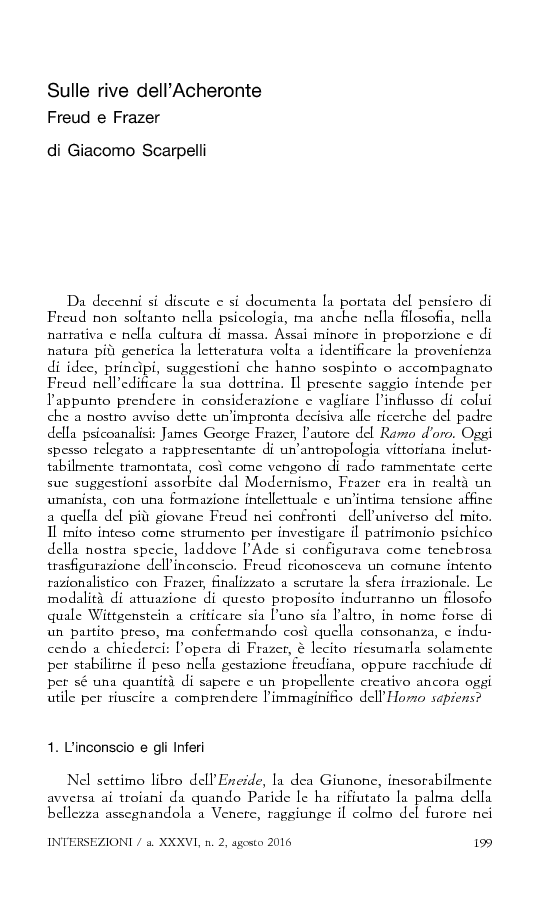