In 1624 the corsair Aly Raìs was captured by Sicilian galleys. Brought to Palermo, the Inquisition suspected that it was dealing with a renegade Christian. After gathering numerous testimonies and locating his baptismal records, they formally accused him of being the Ferrarese Francesco Guicciardino, taken by corsairs as a child and brought to Tunis, where he embraced the Muslim religion, became captain of the galleys of Biserta, and preyed on Christian shipping. Against these accusations, Aly claimed to be «Turkish» by birth and hence beyond the jurisdiction of the Holy Office. By examining sources from Madrid (the inquisitorial records), from Tunis (the correspondence between the leaders of the Regency and French consular documents), and from Palermo (the letters of the Deputation for the Ransoming of Captives and of Cardinal Giannettino Doria), it is possible to reconstruct the political and diplomatic negotiations over a failed ransom, which enables us to see the complex of interests in play, beyond the commercial and financial interests typical of the economie de la rançon. 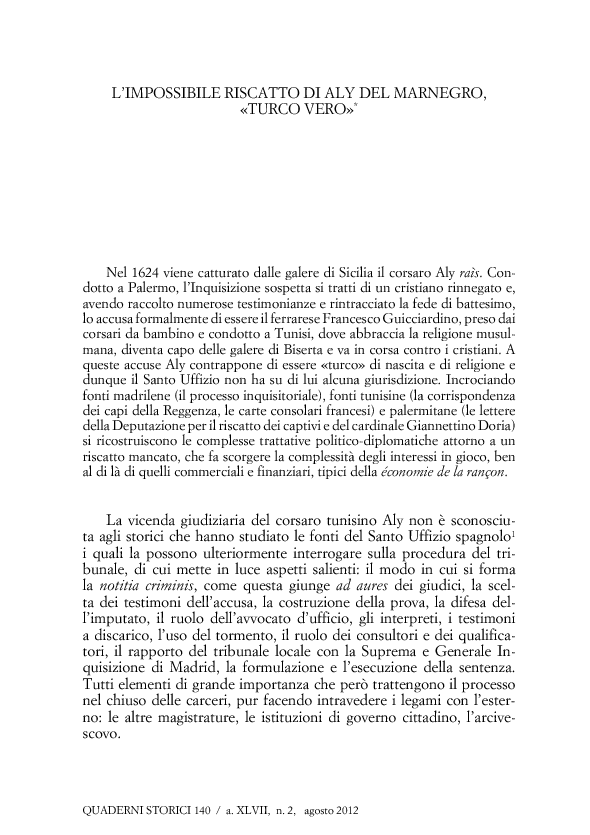