Today, singers composing and performing their own variations for the da capo in their arias have to address and overcome difficulties of two kinds. Not only is there a gap, and consequently a potential 'clash of styles,' between the musical idiom of the 18th century and their own, but the traditions of improvising and ornamenting have been interrupted for almost two centuries. In addition, those very traditions have been vehemently rejected since the age of Beethoven, and aesthetic ideals promulgated later on - such as Werktreue (respect for integrity of the original form of the work; E.T.A. Hoffmann 1814) and respect for the intentio auctoris (Wackenroder 1797) - still dominate our perception of classical music. The purpose of this essay is to deconstruct the most common condemnations of the so-called abuses of the singers, by showing that they are based on fundamentally external premises that are therefore not relevant to 18th-century Italian vocal music. The simple fact that an aria with da capo was "written" by two complementary authors - i.e. the composer and the singer, each taking into account the contribution of the other - leads us to consider the basic notions of 'author' and 'text' in a new way. Both the study of how orator and logographer (writer) interact in the rhetorical culture inherited from the Classical world, and the Hegelian classification of performers (1829), help us to a better understanding of the cultural context of the da capo and its variations. On the one hand, when composers make themselves unperceivable and create the illusion of the performer's voice in passages such as the periodo di cadenza (Galeazzi 1796), they use the device of accommodatio which logographers used to leave over to the speakers. On the other hand, the variations of the singer in the da capo can be understood as new voices and characters showing off, a procedure ancient rhetoricians dubbed personarum fictarum oratio (Quintilian). As in spoken tragedy, the monological mask becomes a dialog between other masks (Fumaroli 1972). Diderot's distinction between the style simple and style figuré (1757) can also help in identifying two opposite kinds of expression. As an imitation of human speech, the style simple expresses the inner soul. On the other hand, the style figuré is a display of the outside of the soul: the metaphor of wild nature (storm, lightning) enables composer and performer to exceed the limits of human nature. Two examples of da capo realizations in Vivaldi are given, to show what kind of voice is expressed, to what purpose, and when. 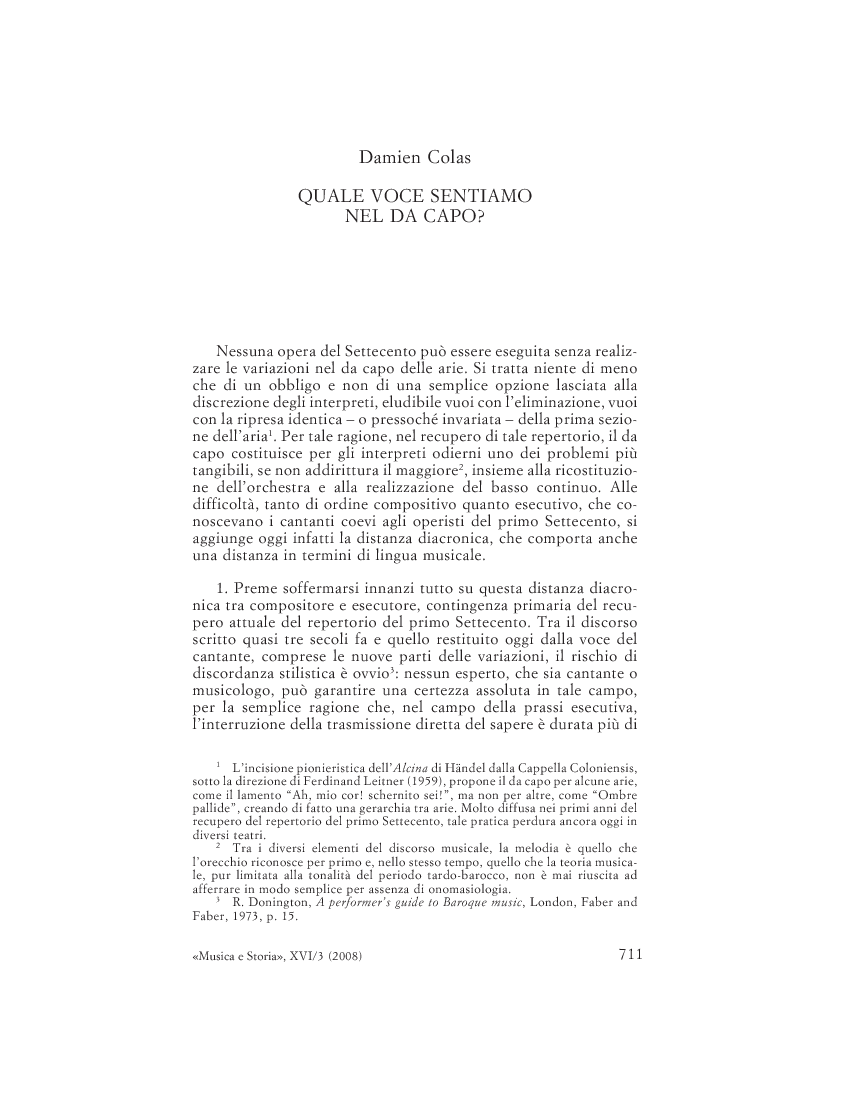