This study examined use of nouns and verbs in the children lexicon at 20 months of age and its relation to nouns and verbs use in mother speech. 15 childmother dyads participated in the study and were observed at home during a play session. At the same age were administered a vocabulary checklist (PVB) too. Children lexicon was coded for types and tokens frequency of nouns and verbs derived by observation, and for types of nouns and verbs derived by PVB checklist. Mother speech was coded for type and tokens frequency, utterance position (initial, central and final), and morphological variation of nouns and verbs. The results showed that children use more nouns than verbs derived either by observation or by checklist. On the contrary mothers produced more verbs than nouns. Moreover they placed verbs more frequently than nouns in initial and central position, they placed nouns more frequently than verbs in final position, and they morphologically marked verb stems more than noun stems. Though the input that children hear is verb-biased rather than noun-biased, children use more nouns than verbs. We can interpret this result on the base of morphological transparency of nouns relative to verbs that would simplify the acquisition of nouns respect to verbs. The final position again, more frequently occupied by nouns, would advantage the learning of nouns. 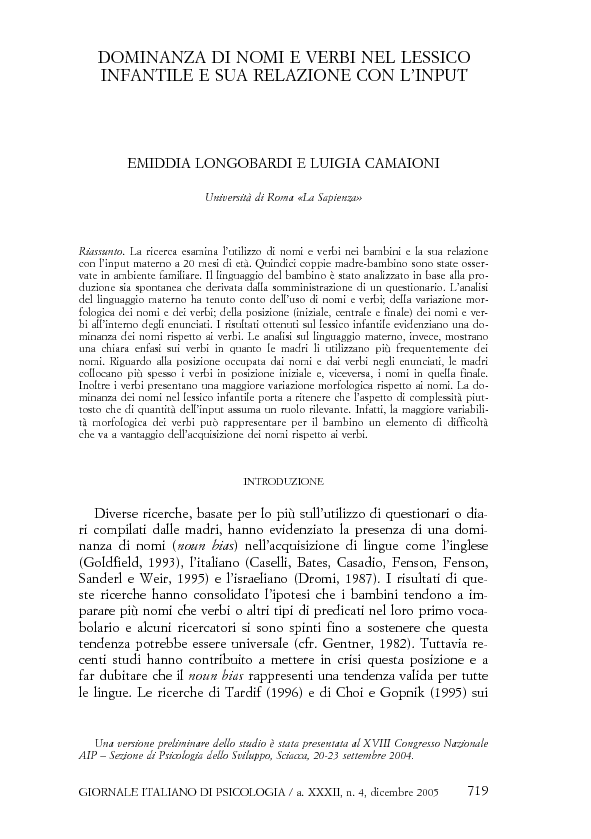