Many authors claim that imitation of facial gestures in infancy (known as early imitation) is mediated by an abstract representational capacity that is innate. It has been claimed that this representational capacity plays an important role in later development of social and cognitive abilities. The hypothesis of an innate representational capacity, known as the Active Intermodal Mapping account, assumes that infants can spontaneously imitate numerous facial gestures from birth. However, some studies have not confirmed widespread imitation abilities. First, rather than being a spontaneous ability in infants, early imitation could be the result of the specific procedure used in most studies; a procedure that some authors (Nadel, 1986) claim instructs the infants in what gesture to perform. Studies that used different procedures from that most commonly used have obtained contrasting results as to infants' imitative ability. Second, in contrast to the Active Intermodal Mapping account, several studies have obtained evidence of infants' ability to imitate only one facial gesture. Furthermore, results suggest that imitation declines after the second month of life. We investigated these issues by conducting a longitudinal study of imitation of two facial gestures (tongue protrusion and mouth opening) in a small sample of infants (N = 13) tested every 10 days from 15 to 125 days of age (4th month). Mothers modelled the gestures in front of their infants using a procedure that avoided recursive display of the same gesture across the imitative session. The goals of the study were to: a) test if infants imitated the two gestures even if mothers displayed a gesture a small number of times in a single brief period; b) test the longitudinal trends in imitation of the two gestures across the first four months of life. Results suggest that infants imitated only one gesture, tongue protrusion, and not the other facial gesture (mouth opening). Furthermore, infants imitated tongue protrusion only during the first month of life: this ability declined significantly after this period. These results are not consistent with the claim of an innate and abstract representational capacity: direct and limited links between specific sensory and motor representations could instead be at the basis of early imitation. These partial links between specific sensory and motor representations could be an aspect of the behavioural organisation of the neonatal period that is later re-organised on different bases. 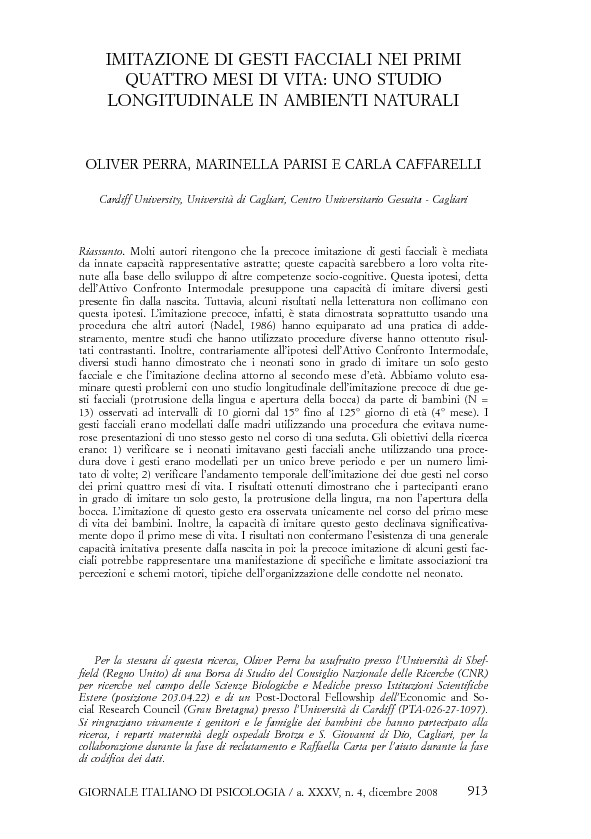