The present work aims at adapting the Self-Description Questionnaire- I (SDQ-I, Marsh, 1988) to an Italian sample. The instrument is designed to uncover eight different dimensions of self-concept in children: physical ability, appearance, relations with peers and with parents, self-concept in mathematics, in verbal skills and in school subjects, and global self-concept. The SDQ is a self-report measure consisting of 76 items with response on a 5-point Likert scale. The sample comprised 781 children (409 males and 372 females) aged 8-15 years. We also used peer nominations to assess victimization, which was expected to correlate negatively with self-concept. Although results suggested a 6-factor structure (school subjects and global self-concept were excluded), they confirmed the multidimensionality of the instrument; the scales presented a good reliability and a good test-retest stability. Correlations among scales are in the expected direction. Gender differences emerged especially for verbal and mathematical self-concept, while, with age, self-concept tended to decrease in almost every area. Victimization was particularly associated with peer relations self-concept. 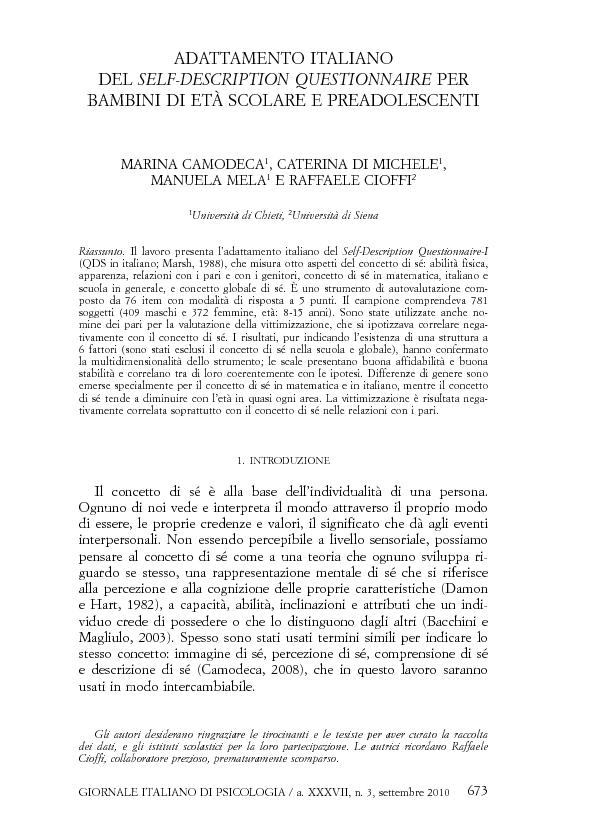