Psychology is a «fragmented» discipline (Gaj, 2016). That means that in Italy there is a wide gap between the results achieved through scientific research and the impact they have on the job psychologists actually practice. Research makes advances but its achievements have no influence on the job psychologists are required to practice. No doubt, there is a large gap between the theoretical underpinnings of the job and the operations the job actually requires. University teaching is open to the influence of new knowledge, which emerges from psychological research. These advances are transferred to academic courses. This new knowledge, however, has no effect on the jobs most of the professional psychologists will then be required to practice. About 55% of those who have a master degree in psychology hold a job «in which an expertise in clinical psychology is mandatory and some kind of psychotherapy often plays a role». The teaching of psychology in the five leading Italian Universities has been taken into consideration: Bologna, Milano-Bicocca, Padova, Roma-La Sapienza and Turin. An estimate is provided of the amount of academic credits (CFU) granted by those courses that are deemed to be relevant. That is, by those courses that apparently train the students for the type of job most of them are likely to hold in the near future. These credits vary widely: from a minimum of 36 to a maximum of 102. It is plausible that the inconsistency and lack of coherence between academic training and job requirements have negatively affected the public image of the profession, along with an excess of practitioners in the field. Even worse, it has likely fostered a view of psychology closer to naïve and conventional aspects, rather than to the most advanced and scientifically sound ones. Istat has estimated in 2016 that, among those with a university degree, a year after graduation, those with a degree in psychology show the highest unemployment rate (31.5%) and the lowest income. What makes psychology as a profession stand out among all other professions is exactly the wide gap that exists between the theoretical bases, as are taught in academic courses, which do not train for most future jobs, and the applied contents as are taught in private schools of specialization, which are explicitly meant to train for future jobs. It is the presence of this gap that renders graduates in psychology less competitive than those with degrees in other subject matters, in which the fragmentation that is discussed in the present paper does not exist or exists in a weaker form. 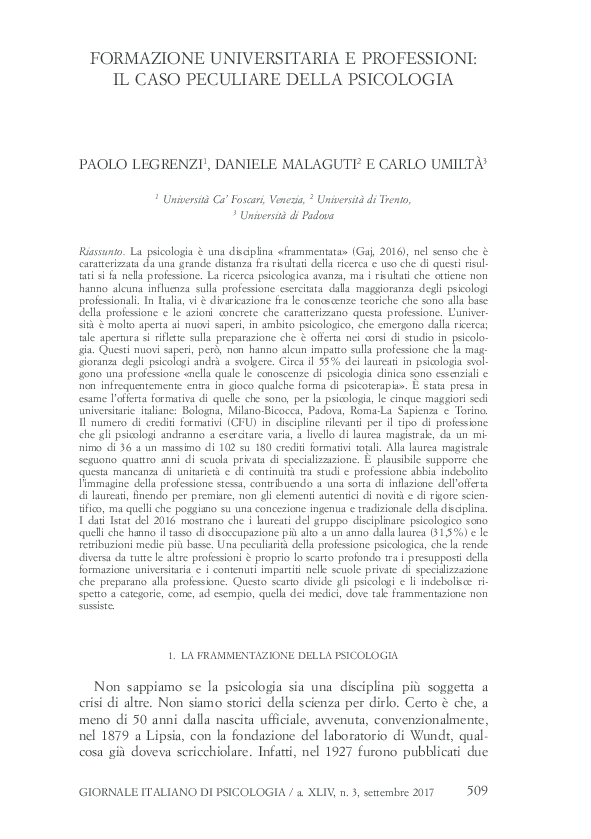