This article traces the formation of a new discipline - International Political Economy (Ipe) - both in terms of concepts and theoretical debates, and of the social process of its institutionalisation, as shown by journals, textbooks, course offerings, and Internet websites. The article is divided into three parts. In the first, some well-known definitions of Ipe are presented, and different types of theory are illustrated. Special attention is given to the definition of Robert Gilpin because of the importance of his work and the evolution of his thinking about Ipe. In the second, the thirty-year life of IPE is analysed to identify the most important events leading to the creation of a new field of social research: the organization of conferences in the early seventies; the publication of important books written by unorthodox economists like Kindleberger and Hirschman, and theoretical debates. The work of R.W. Cox, which is related to the "Gramscian turn" in International Relations, is a particular focus of attention. Finally, the consequences of the "Fourth Debate" on Positivism in International Relations are considered in terms of the connection of Ipe with constructivism, historical sociology and the "cultural turn" in the social sciences. The third part shows how the debate on Ipe has moved from being fully internal to (American) Political Science, to include general concerns about the social sciences at the beginning of the XXI century. An extensive bibliography follows. 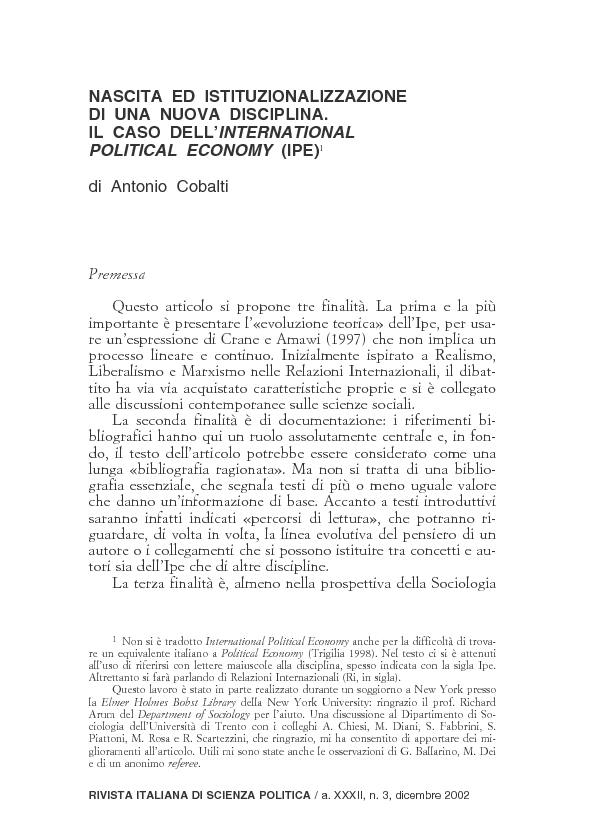