Keywords: Financing of Municipalities; Gap between North and South; Rules of Constitution.

In this paper two issues are discussed, with reference to 2015 stability act: - the issue of how Municipalities can suffer the «cuts» provided for by the law; such issue is linked to tax rise, which is an unavoidable consequence of the «cuts»; - the issue of how resources are distributed in the territory, above all with reference to the financeability of essential service levels. To get to the bottom of the problem, the correspondence of the current system of government to the final significance of the rules of the Constitution has to be considered. In this paper it is argued firstly that the reference to the socalled «solidarity» among territories, in some way, breaks Constitution rules; secondly, that the role of the «Commission State-City», created by the stability act as well as by recent experiences, is too much prominent; thirdly, that the guarantee, though at a theoretical level, of the «complete funding» of municipal services, as laid down by the art. 119, paragraph 4, of the Constitution, is far to be implemented. The outcome of all this leads to a disastrous financing of the Municipalities of Southern Italy, thus seriously compromising households' standards of life and businesses' chances of survival. 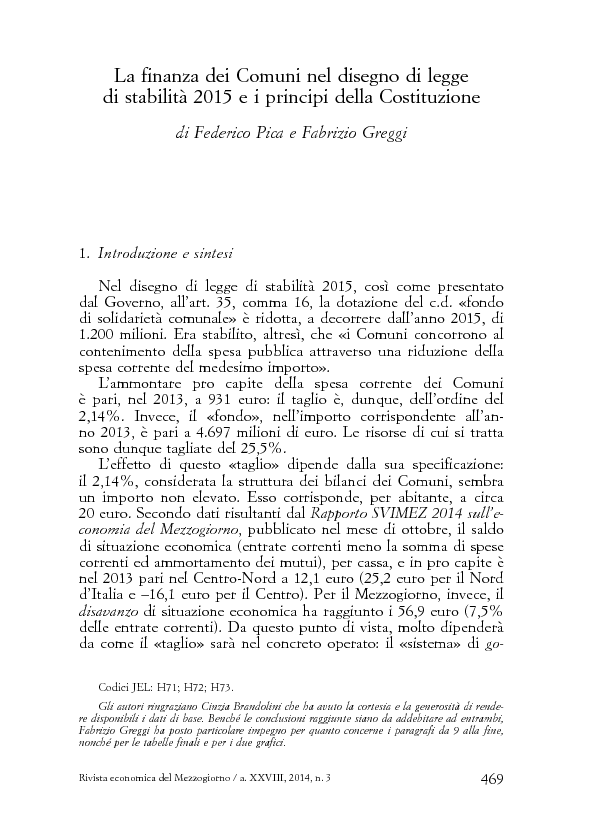