In its' Policy Recommendations for Regulatory Quality of march 2005 the OECD addressed Member States involved in the reform of public utilities, claiming for "policy coherence", "multi-level co-ordination", "ex ante and ex post assessment". If the promotion of competition in network industries remains a central goal (as it was in the 1997 Recommendation on Regulatory Reform) the OECD is now asking for reforms to be finally implemented. The achievement of such goal imposes Governments to consider that regulatory quality may not be attained exclusively via good rule-drafting. Regulatory reform (and its by-product, regulatory quality) is not a one-off effort, accomplished once and for all, but a dynamic, long-term, multi-disciplinary and proactive policy. Therefore, all elements of the reform "process" should be integrated (such as policy, instruments - whether regulatory or not - and, especially, institutions). The Italian electricity market has undergone major changes in the past decade. Given its inherent complexity, it provides an interesting case study to analyse and evaluate the institutional capacity to perform and properly accomplish that exceptionally organisational challenge called regulatory reform. The article is organised as follows: after a brief review of the literature on institutional design (par. 2.1), it will focus on fundamental contradictions stemming from some "inherited" political choices (parr. 2.2.1, 2.2.2, 2.3.3); afterwards, problems of the initial design of the reform will be analysed focusing on both the drafting of legislative texts (par. 2.2.4) and the allocation of enforcement responsibilities (parr. 2.2.5 and 2.2.6). Aiming at testing the robustness of the reform design to the risk of capture, we finally describe some interactions among actors in the regulatory arena (par. 2.3), suggesting that they come more or less directly (path dependency), as a consequence of that initial design and its practical implementation. The conclusion (par. 3) will point onto the need for more clearly defined objectives; greater coordination and coherence across levels of government, and regulatory responsiveness. 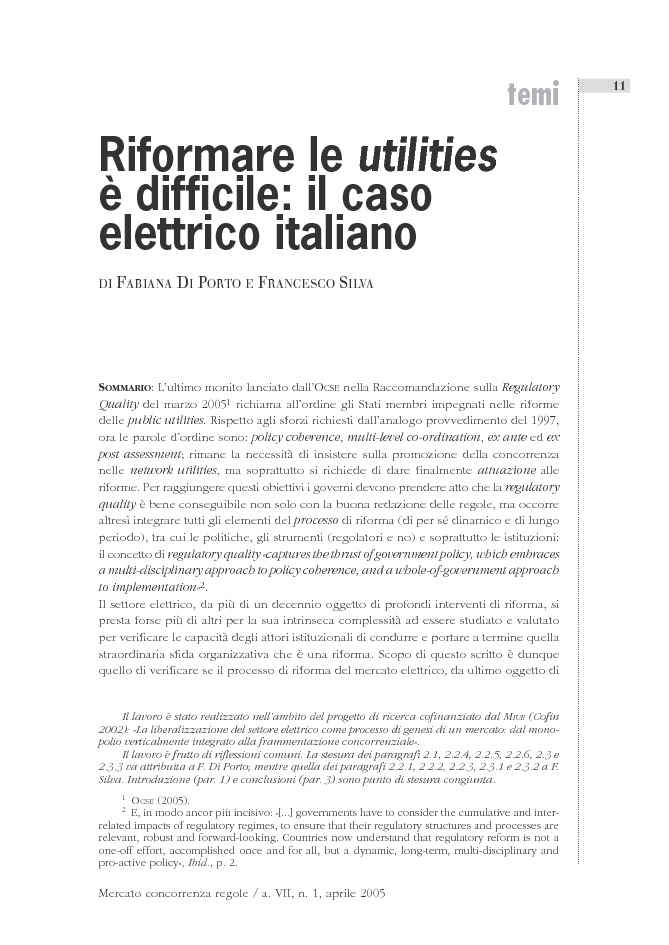