The concept of ‘Asian laws in Britain’ was proposed in the 1990s by a leading scholar of South Asian laws, Werner Menski, within the larger framework of legal pluralism. This article explores the reasons why it might be an attractive description and the possible reasons for its shortcomings, as well as a brief assessment of its take up more widely among scholars, officials, the communities to which it refers and others. The article examines the viability of this conception of Asian laws in the British diasporic sphere by entering the broader debate between the proponents of legal pluralism and their naysayers, identifying the main lines of dispute and its productive results as well as their limits in helping to make progress towards a theory of law. The mutual accusations of ethnocentrism, Eurocentrism or parochialism among the debate’s protagonists are discussed in order to identify how legal pluralists may be open to the charges they level against their opponents. The discussion is given more concrete form by drawing attention to the arguable non-universality of the domain of the normative upon which legal theorists and legal pluralists generally rely for their conception of law. If the domain of the normative is not universal, law itself cannot be universal as the legal pluralists claim. Although Muslim/Islamic law appears to have gained a large number of adherents among the reconstructed components of Asian laws in Britain, the discussion shows how another component - Hindu law - cannot be ‘law’ in the manner its proponents claim. The consequences for the viability of a conception of diasporic Asian laws in Britain are then drawn out. 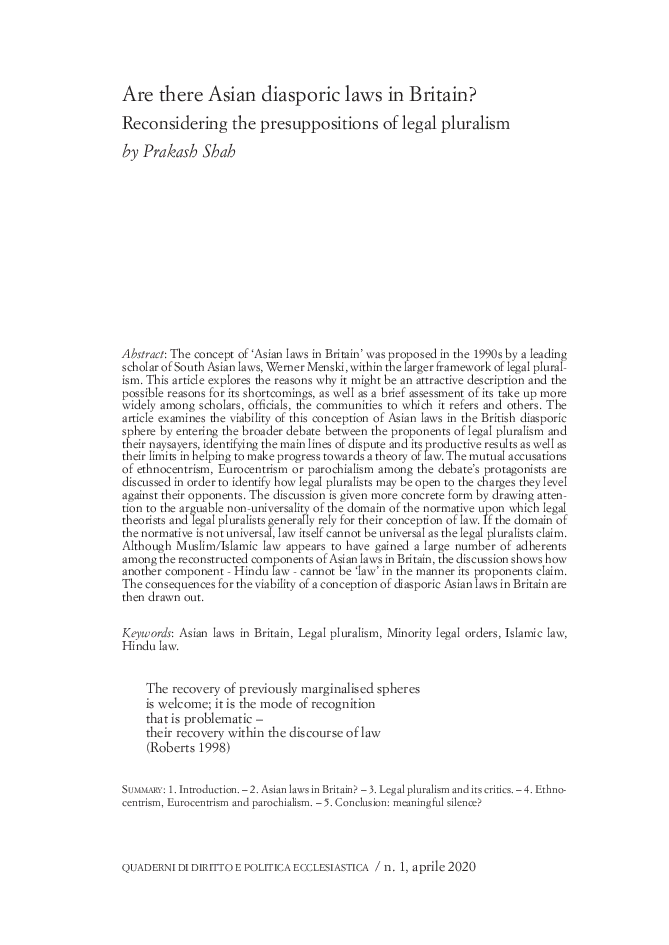