The essay focuses on the relation between labour law and antidiscrimination law, taking as an example the recent development of Italian labour law in the field of the new rules for flexible jobs ("Libro Bianco", Delegating Act n. 30/2003, Legislative Decree n. 276/2003) on one hand and the recent implementation (Legislative Decree nn. 215-216/2003) of EC antidiscrimination law (EC Directives 43-78/200) on the other hand. According to the author's opinion, labour law and antidiscrimination law keep on following two parallel tracks; as a consequence, the real impact of antidiscrimination law is very tight. Moreover, the recent Legislative Decree n. 276/2003 not only engenders new differences (and new discriminations) between typical and atypical workers (man and women), but also "uses" these differences for rebuilding a "new" labour law: a labour law formally aimed at the social inclusion of all workers (man and women, again) whom the law looks upon, as a whole, as "disadvantaged workers". Following this path, the law overpasses the traditional principle of equal treatment, based on the equality principle, and allow the breach of such an important rule for disadvantaged workers. These workers are the target of new flexible jobs, which involve worse working conditions and a lower level of rights. New rules are supposed to engender more job opportunities for disadvantaged workers, disregarding their potential and real discriminatory impact. The intervention could create more jobs, but "worse jobs", not "better jobs" as required by the EC strategy for developing occupation. Finally the authors discloses the dangerousness of this approach, that completely changes the meaning of "positive actions", ruled by EC law as "preferential treatments". 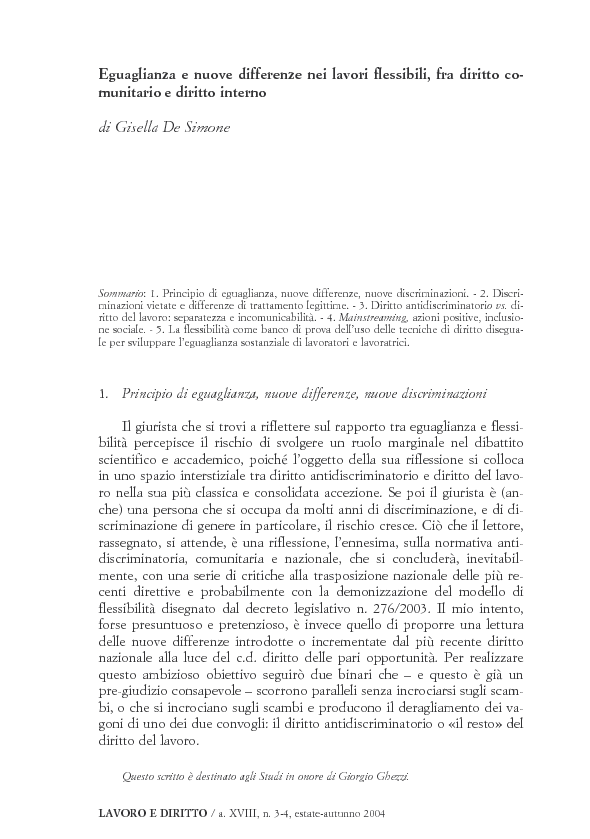