The author revisits the eminent example arising from the life of Massimo D'Antona; he focuses on his versatile personality as a man, as a public intellectual engaged in seminal social and political reforms, as a legal scholar, as a professor, and as a "maestro", i.e. the leader of an academic school of thought. From the various paths of his life, the portrait emerges of a person who was gentle and unassuming but, at the same time, stern and rigorous; but also that of a scholar who was inspired by a strong humanistic vision, in which the worker "sans phrase" was at the heart of an ambitious cultural project of re-conceptualization of labour law. Such a plan went beyond national borders and engaged with the European dimension. This perspective on the 'land of Europe' constitutes, indeed, one of the legacies from him as a scholar and a "maestro" of an academic school. As a public intellectual actively engaged in politics, his legacy is alive in the reforms he made - especially in the field of employment in the public service; they were innovative and radical measures, yet they were agreed upon and supported by the majority. As a legal scholar, the steadfast clinging of his thought to the ideological and cultural heritage of the Italian Constitution was remarkable. As a critical thinker, one remembers his continuous questioning of the myriad possibilities left open by the construction of constitutional provisions. And, ultimately, there is the remembrance of a personal friendship that ennobles eternal feelings. 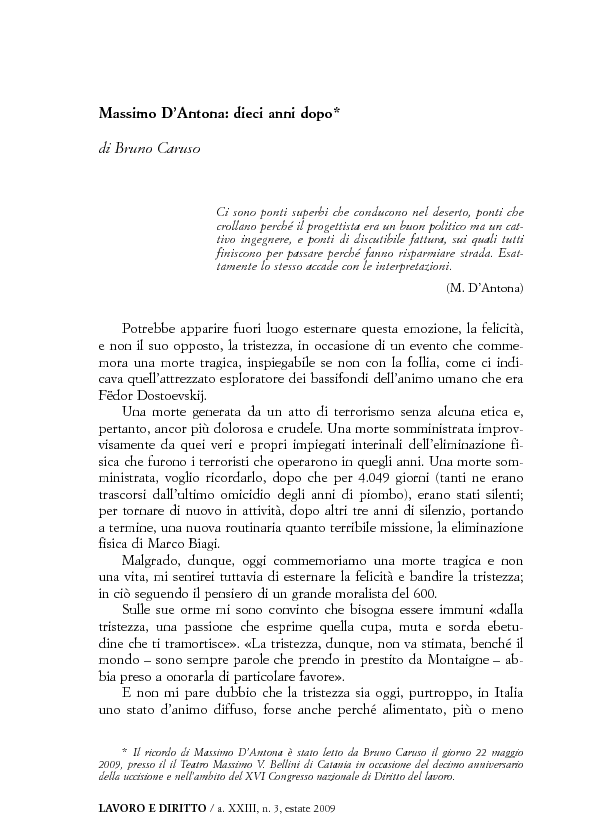