This section of the journal collects a number of papers presented at two meetings held in Florence ("Reorder the chaos: possibility to know the norms and role of legal doctrine", papers by P. Grossi, M. Persiani, A. Pizzorusso, R. Del Punta) and in Milan ("Multiplicity, fragmentation and obscurity of sources: is it possible the transparency?", papers by F. Scarpelli, M. Jori, V. Ferrari) to discuss the "Codice dei lavori", an original and very innovative statute-book of labour legislation. O. Mazzotta, "The Codice dei lavori by Marcello Pedrazzoli: or what can legal science do for the knowability of norms", introduces the debate, which is ended by the same editor of the Codice, M. Pedrazzoli, "Logistic of norms and knowledge of labour law (following a codice dei lavori)". According to the author it is always more and more difficult to "know" the law because there is a multiplication of sections of legislation in which single issues are fragmented and regulated and also because these sources do not mention which are the other acts - or pieces of legislation - which rule the same issue. To avoid this "impossibility to know", which looks to be inevitable specially in Labour Law, the author individuates a series of techniques, intended to order systematically the norms, to recompose the fragmentation, to clarify some obscure content, and therefore proposes - in his "Codice dei lavori" recently published - a "logistic of norms" ("nomologistica") which could tackle drastically the problem. 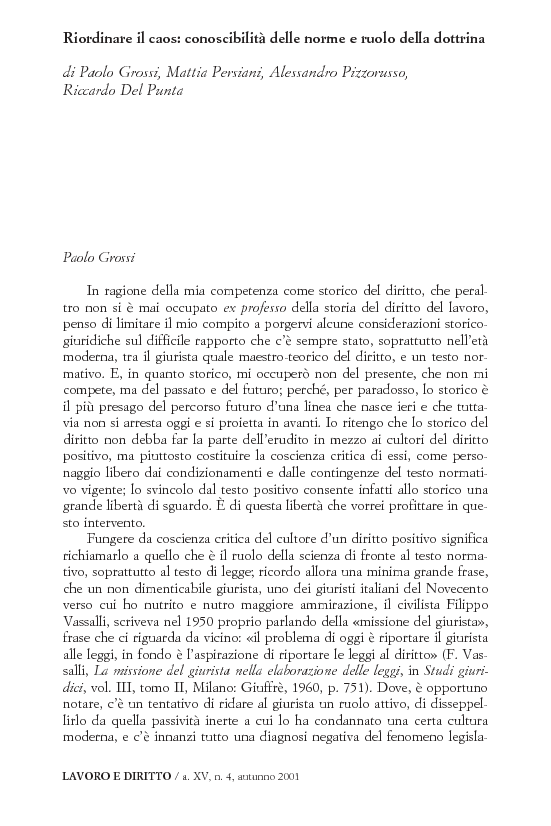