The cult of Guadalupe is - on a devotional, pastoral, symbolic and political, even historiographical level - one of the deepest elements of the Mexican collective imaginary. A cult originally built around strong syncretistic connotations that, during the second age of the colony, redifined the relations between Mexica-Nahuatl society and the Hispanic world; but also a cult that, over time,has become a large national identity catalyst, far beyond the independence process (XIX century) and the revolutionary events (XX century). This peculiar Marian element has transformed itself in a sort of homeland motherhood and Mexicanness symbol that crossedtime and borders (with the chicano and migrants cultural experiences). Often taken as a symbol of peace and reconciliation, inside the complex modern mexican history, the guadalupanismis usually identified with mass pilgrimages to the Basilica of Tepeyac, on December 12, by linguistic disputes and theological controversy and even by religious marketing phenomena. The pontificate of John Paul II, seriously reflecting on the evolutionof this devotion,marked a series of delicate steps in this direction, in particular following the beatification (1990) and subsequent canonization (2002) of Juan Diego, the "humilde indio" Mexica which the Virgen would have appeared four times in December 1531. This paper seeks to reflect on the transformation of the cult of Guadalupe during the long pontificate of Karol Wojtyla, with particular attention to the double dialectic between national/transnational dimension of historicizing and re-invention of tradition. 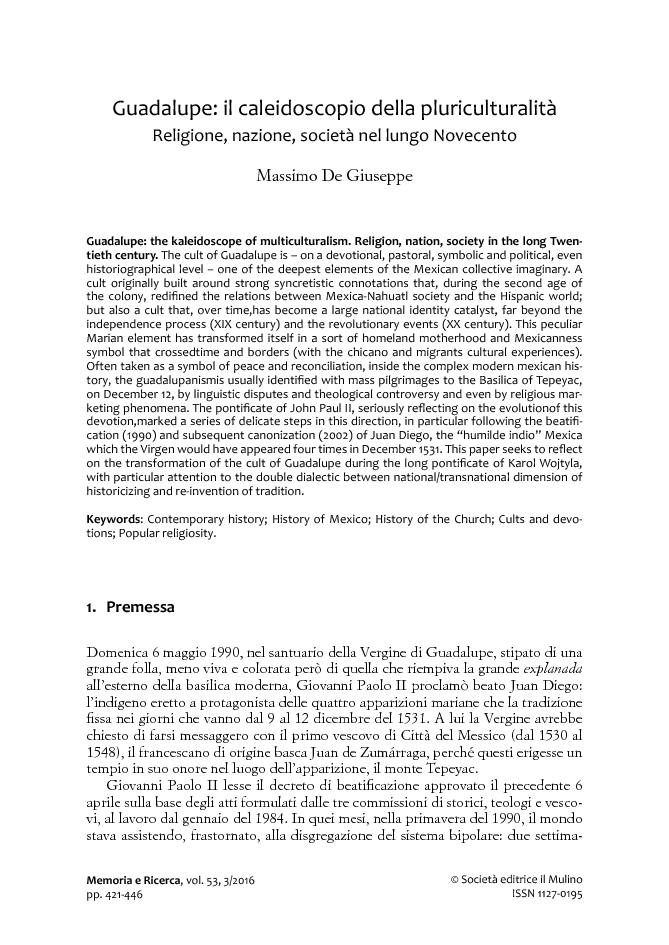