Keywords: Vatican; 150th Anniversary of the Unification of Italy; Risorgimento; Public Use of History; Italian Identity.

The article aims to study the position taken by the Vatican on the occasion of the 150th anniversary of the unification of Italy in 2011. Starting from the official newspaper of the Holy See, «L'Osservatore Romano», (from September 2010 to September 2011), and further more analysing an exhibition organised by the papal newspaper in cooperation with the Senate of the Italian Republic (March 2012), the author aims to explore the way in which the Vatican reconstructed and interpreted the Risorgimento movement and the post-unification history of Italy, highlighting revisions and revaluations. Investigating the Pope's prospective of the process of foundation of the Italian state, and focusing on the Vatican's approach to its commemoration, goes to the heart of a central theme of Italian public life: the relationship between the Vatican and the Italian state, whose foundation - the object of the celebrations in 2011 - not only occurred without papal involvement but against the Pope's wishes. The article evaluates the way in which the Roman Curia characterizes the Italian identity. Although focusing on a relatively limited time frame, it advocates a long term comparison of the Vatican's outlook, aiming to bring to the fore the evolution in the Vatican's approach to celebrating the unification of Italy in the three jubilees of the Italian state (1911, 1961 and 2011). By highlighting the participatory modalities and the narrative structures presented in 2011, it hopes to investigate how the past became functional to the present and, furthermore, to underline the political implications of such public use of history. 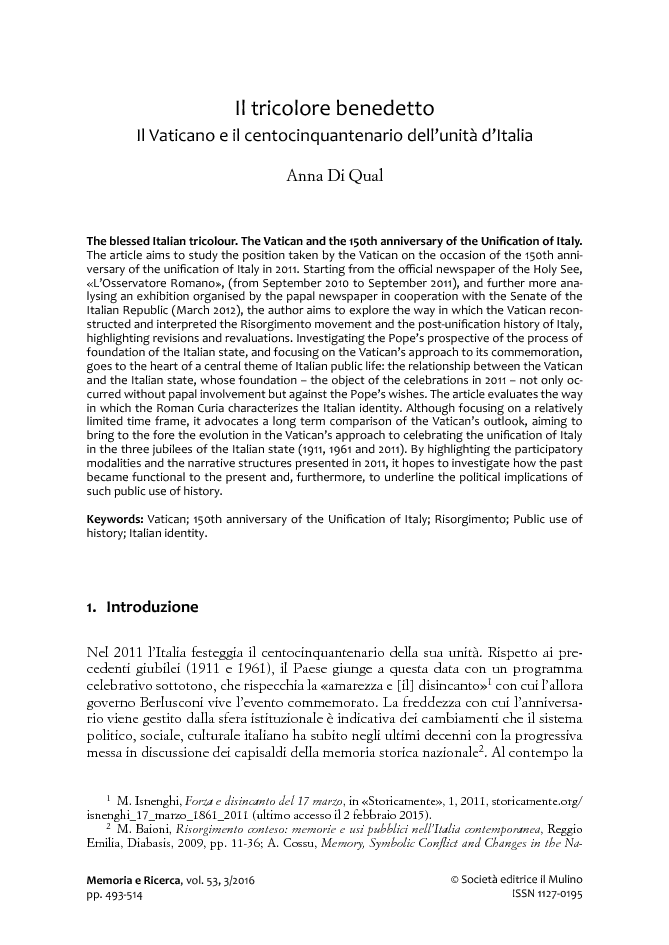