The bridge metaphor, today fashionable because it is opposed to the walls, is much more complex than common sense appears. From the pioneering essay of Georg Simmel, "Brücke und Tur" of 1909, the bridge appears as a «symbol», that is a double figure, since in the act of connecting, at the same time, the idea of separation persists. The text, in addition to briefly dwell on the famous novel by Ivo Andrić, "Na Drini uprija" (1945), who sees the Visegrád bridge as absolute protagonist, as well as Martin Heidegger's ecumenical interpretation - the bridge as a «meeting of Quadratura» ("Bauen Wohnen Denken", 1951) - especially emphasizes the «sacrilegious» appearance of the bridge as appears from the story of Rudyard Kipling, "The Bridge-Builders" of 1893, heir to an archetypal theme widely investigated in the fundamental book by Anita Seppilli ("Sacredness of the Water and Sacrilege of Bridges", 1977). All the «tragic» of this manufatum is fully taken over in the shape of the bridge, a recurring image throughout Franz Kafka's work, particularly in the extraordinary and decisive tale of "Die Brücke" (1916). Here, for the first time, a bridge decides to move, thus determining his own death, given that, as the great Prague writer comments: «Once thrown, a bridge can not stop being a bridge without falling». The text ends on the question whether contemporary bridges, in the wake of Paul Klee's painting, "Revolution des Viadukts" of 1937, can move without collapse. 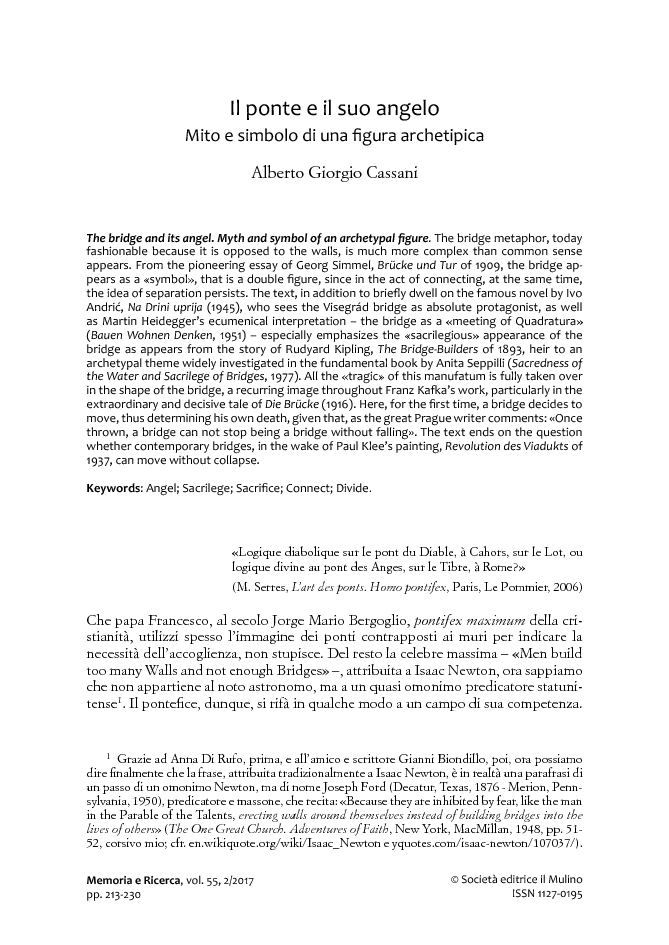