The Bureau des Dépositions (Bureau of Depositions) is an ensemble of ten co-authors with varying legal and administrative statuses, the majority of whom were born and lived in Guinea, West Africa, prior to making their journey to France in 2016 or 2017 in order to demand asylum. The Bureau, declared an immaterial work, also comprises a series of performances and ongoing research-creation processes that are signed in co-authorship. This includes the performance Exercises de justice spéculative (Exercises in Speculative Justice), through which the Bureau’s co-dependence is asserted in the face of deportation orders from France that threaten both the lives of the undocumented members and the work that is the Bureau des Dépositions. Through the strategic use of French laws that protect the integrity of art works, author’s rights (droits d’auteur) are mobilised in order to petition for the co-authors’ right to remain in France, with the gamble here being that this could potentially be more effective than appealing to rights of asylum or the sanctity of human (non-citizen) life. As such, the Bureau seeks to create (legal) precedence and participate in the processual transformation of law and life. The performance is not simply about migratory violence, but is a speculative work whose «transformative properties» are used in order to protect the lives of the artists – a work that both points to the limitations of existing (Western) justice and exceeds it, suggesting an alternative conception of justice embodied by the Bureau. Having witnessed the Exercises in October 2020 in Marseille, we provide a narrative of the work, its genesis and precedents, and a series of reflections upon themes raised, including: the representation of minority speech within and beyond contemporary art, economies of testimony, intellectual property rights and collective creative practices, histories of sans papiers activism in France, the production of criminal lives, a politics of the living and the performance of justice. In our reading, the work enacts a decolonial aesthetics that intervenes through an alternative framework of representation and justice. An English translation of a partial score of the Exercises de justice spéculative performance is also included. 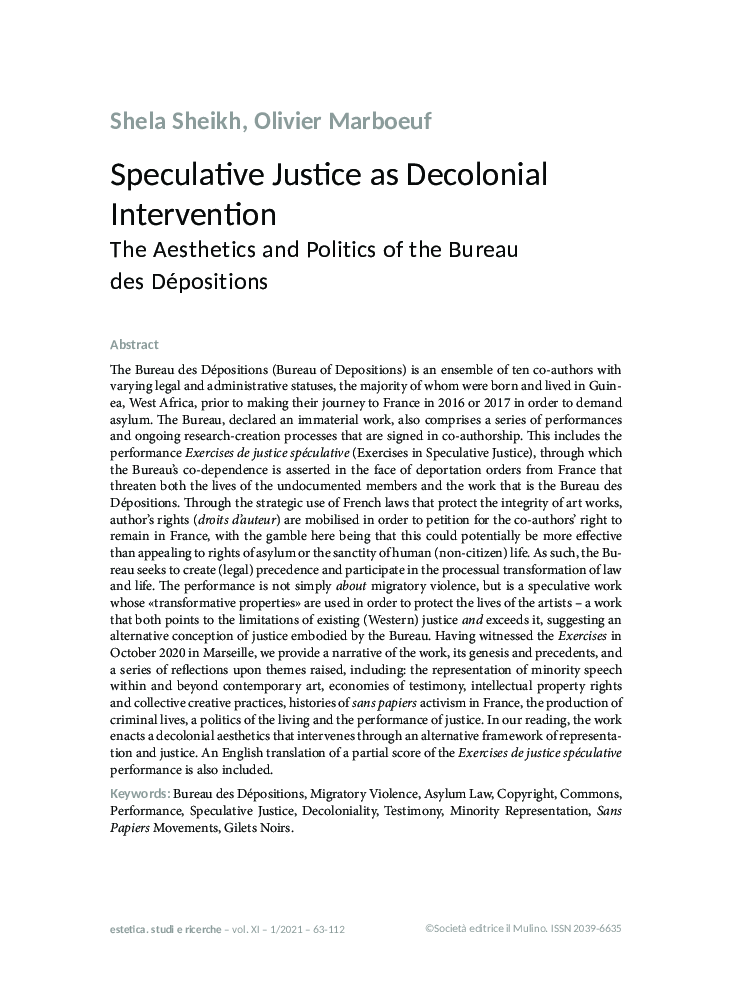