In this article I intend to investigate and connect the different meanings attributed by Elias Canetti to the enigmatic category of metamorphosis, one of the most recurrent and elusive concepts in his entire production. A reconstruction of them will be guided by the images, myths and anthropological accounts that run through Crowds and Power: in Canetti’s works these various materials assume a privileged epistemic function precisely for their ability to grasp the concrete processes of formation of the crowds and power in human history. Starting from this «conceptual aesthetics», Canetti gives the reader a very rich picture of myths, legends, stories that allow him to reconstruct three fundamental passages: the link between man’s initial state of relative powerlessness in relation to the rest of the living world and the human capacity for self-transformation acquired to imitate the number of other animals and to indulge the human desire for growth; the anthropogenic role played by totemic devices in stabilising the undefined metamorphic potential of the human; the equation between power and survival due to the rupture of the original link between metamorphosis and growth. This constitutive tension between power and metamorphosis further sheds light on the meaning of the latter by overturning each of the categories selected by Canetti to investigate the mortifying dynamics of power. Indeed, in the essays and autobiographical volumes of one of the most original and provocative intellectuals of the twentieth century, the human capacity for transformation into another living being is systematically contrasted with the passion to survive, which lies at the heart of every manifestation of power, alternately juxtaposed with a psychic pathology such as paranoia and the notion of «prohibition on transformation» 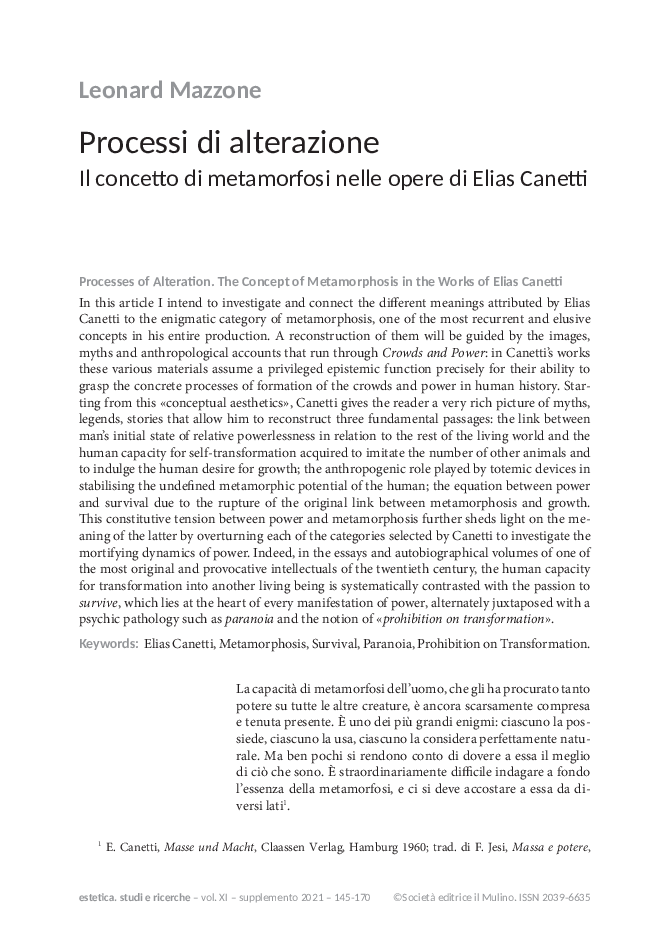