The essay aims at reconstructing the role secular and liberal-democratic university professors played during the first period of the Republic. It focuses the attention on two fields: their participation in the debate on university reform, and - more specifically - their academic policy. As for the first topic, according to the thought of some absolutely significant personalities of liberal-progressive milieus (above all Giorgio Pasquali, Adolfo Omodeo, Ernesto Codignola, Guido Calogero) a clear willingness emerged to look at the Gentile reform - and at its alleged liberal consistency - as a reference model. One can easily see that, at least until the conference organized by «Amici del "Mondo"» on February, 1956, even the strongest advocates of American innovative ideas on education (Dewey) kept on support an elitist view of university, made of competition and selectivity. The second part of the essay expose and comments on the first results of a research that examines the competitive selections for the recruitment of university professors (concorsi) held between 1945 and 1952. The composition of selection committees and concorsi's results are essentially based on power relationships among different «schools», but sometimes they also show the presence of conflicts which were based on political reasons. Such conflicts especially emerged in the field of the humanities; in particular, philosophical disciplines hosted a bruising row between «secular» (Nicola Abbagnano, Carlo Antoni, Antonio Banfi, Ugo Spirito among others) and «catholic» professors for the control of selection committees and, therefore, of the mechanisms of co-opting into the professorial community. 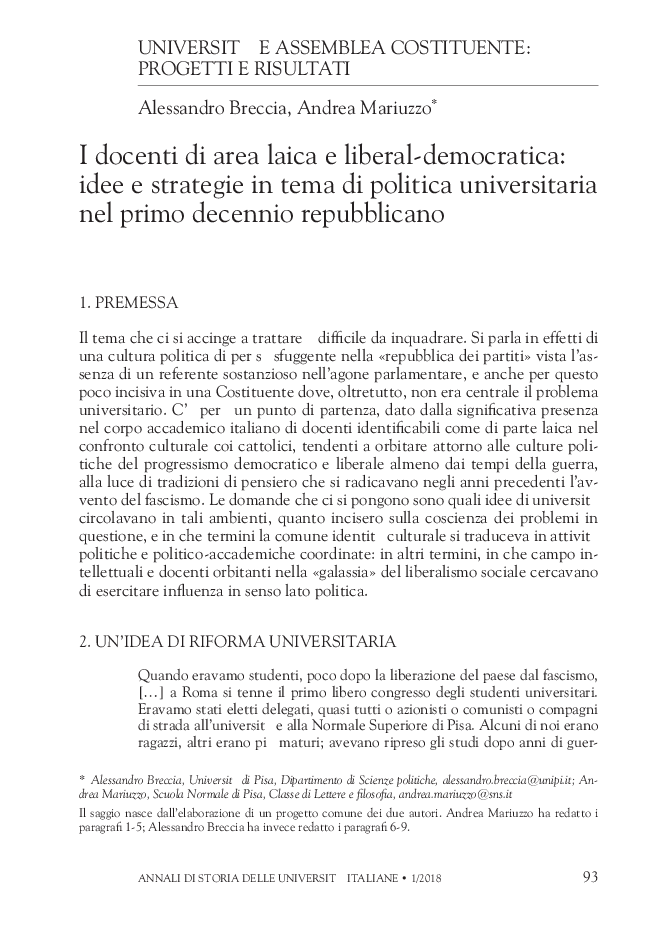