This paper examines the evolution of university education system and the profile of students, undergraduates and graduates, at the School of Corporatist Sciences of Pisa – the first to be established in Italy, in 1928 – and the Political-Corporatist Sciences course created in 1932 at the Faculty of Law of the University of Pisa. This experiment, tested at Pisa, can be linked with the long debate on the idea of founding institutes tasked with forming personnel called to work in public administration and the diplomatic corps. Such a plan came to fruition in the fascist years with the creation of certain schools and faculties of political science that were given the job of forming administrative personnel and the new ruling class of the fascist State. However, the institute created by Armando Carlini and Giuseppe Bottai, like the degree course in Political-Corporatist Sciences and Collegio «Mussolini», were of a rather different nature in that they were explicitly aimed at the theoretical development of corporatist fascism, oriented to the planning of a totalitarian State. The School had a problematic start due to its particular legal physiognomy and to issues concerning its relations with the Faculty of Law of the University of Pisa. In the mid-1930s, it was at the peak of its potential development and the number of enrolled and graduating students was at its highest ever levels. Moreover, analysis of students’ origins shows that, during those years, the School had acquired a clear «national» character. The 1935 De Vecchi university reform had varying consequences. It brought to an end the Political-Corporatist Sciences degree course, which was replaced by Political Sciences that was stripped of all corporatism related subjects. Then there was the departure from Pisa of Bottai, Carlini, Gentile and Spirito, which led to a restructuring of the School and a reorganization of scientific studies, marking the start of the School’s decline with a clear drop in the number of students enrolling. Then, in national political and cultural debate, there was a progressive loss of importance of themes connected with the construction of the corporatist state system. 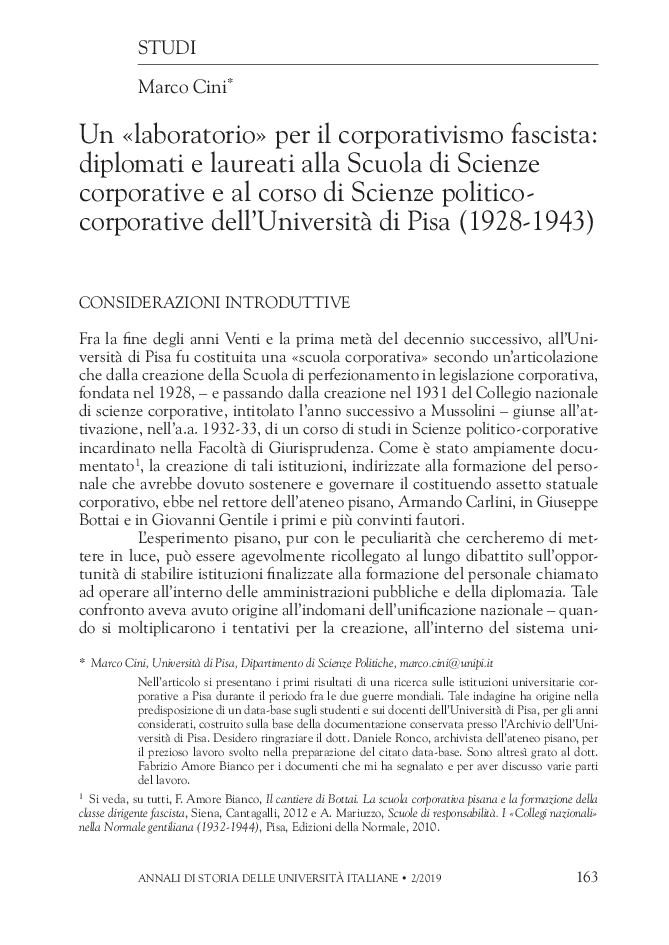