The Syrian Protestant College (SPC) opened its doors in Beirut on December 3, 1866, and the Regents of the University of the State of New York, where the school’s charter lay, registered the name change to the American University of Beirut (AUB) on November 18, 1920. Over the subsequent 150 years, a pivot point for conflict between the administration and the students stands at the intersection of the parameters of liberal education and Arab nationalism. These terms are not static descriptions of the type of American education exported to the shores of Lebanon or of Arab identity, but represent dynamic elements of a developing faculty project and a student quest for agency over their educational experience. Each successive wave of new faculty coming from America brought with them the latest in American pedagogical experimentation, with the late 19 th and early 20 th centuries particularly fruitful years in the construction of what would become the American liberal educational system. Generations of students brought the political life of the Arab world inside the school’s main gate and demanded that the issues of the day be part of their educational experience. AUB was never merely an American export deposited in Beirut unchanged, imposing ideas on student lives; the students were never passive recipients of what the Americans offered. The evolving elements of American liberal education served as the cornerstone of the curriculum; Arab nationalism pushed back against American control of the school’s program and called for more fully embedding life on campus within life in the Arab world. 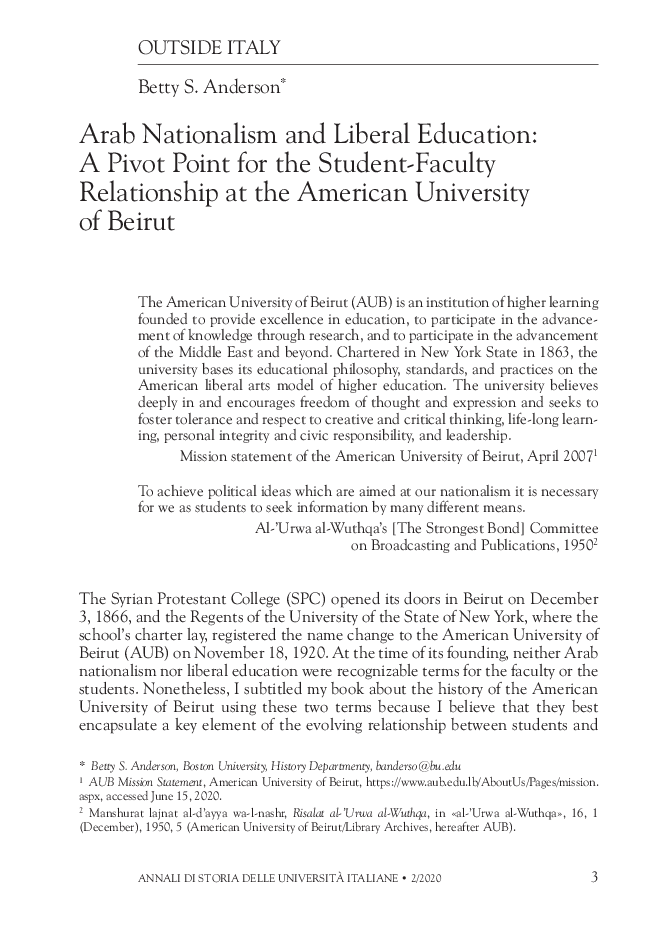