Founded in 1913, from the mid-1940s onwards the government-run Italian Censorship Office banned or approved and rated movies for their theatrical release in Italy, often forcing producers and directors to excise, re-edit or re-dub scenes that are particularly bold in their representations of sex, violence, socio-political or religious themes. After a film is granted the mandatory public screening permission and released, any adult citizen of the Italian Republic can denounce it to the authorities if he/she feels offended by its content, and a second censorship proceeding-cum-legal action against the filmmakers may be started by magistrates in order to reassure the social community. "Salò o le 120 giornate di Sodoma" (P.P. Pasolini, 1975) - approved uncut for public screening and rated «adults-only» by the Italian Censorship Office in December 1975 - is one of the most controversial movies in the history of Italian cinema. Denounced by outraged citizens after its national premiere in Milan in early 1976, seized by the local Female Police and immediately taken to trial, the film was banned on account of its «incredible obscenity» ["oscenità allucinante"] (Tribunale di Milano 30-1-1976). Through a close reading of largely unpublished documents from the first-degree Milan trial against "Salò", the present essay draws attention to a series of phenomena connected to Pasolini's depiction of sodomy and sheds light on the discourses around anal sex in 1970s Italy. 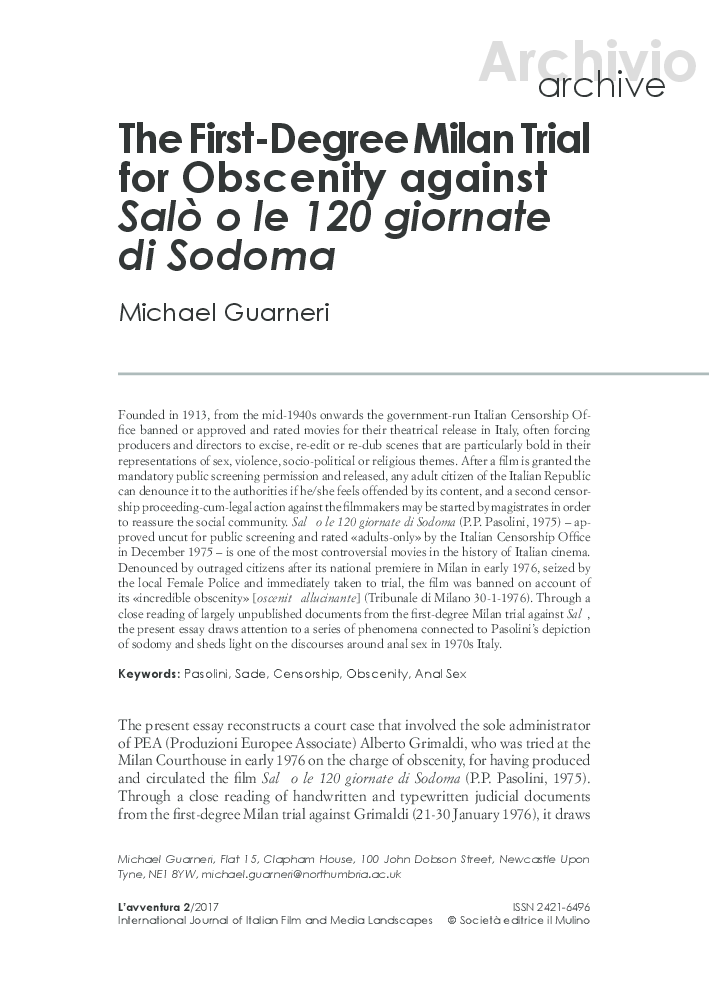