Increasing evidence puts into question the traditional view that present-day languages resulted from language change only, with their distinctive features being imposed by a modern faculty of language emerged via biological changes along with our species. By contrast, our cognitive ability for learning and using languages, and the different languages we speak seem to have been engaged in a complex feedback loop, with our cognition certainly determining key aspects of our languages, but with languages being sensitive to environmental (physical or cultural) factors and impacting in turn on our cognitive architecture. In this paper, the biological and cultural aspects of the emergence of modern languages are reconciled by the self-domestication account of human evolution, according to which our distinctive physical, cognitive, and behavioural phenotype resulted from a process similar to mammal domestication. Under this view, modern languages can be argued to have emerged gradually as a result of a feedback loop with human self-domestication processes, with the management of aggression (initially, the reduction of reactive aggression; later, the rise of proactive aggression) being crucially involved. We further sketch a model of the evolution of modern languages in our species under the effects of self-domestication encompassing four stages, from simple (even single-word) utterances, to simple two-slot grammars (compounds), to sophisticated languages, first optimized for in-group communication, but later optimized for inter-group contacts. This feedback loop between self-domestication and language(s) would have favoured in parallel the emergence of modern uses of language (pragmatics), also via its effects on cognition and particularly, on social behaviour, with the management of aggression being centrally involved too. 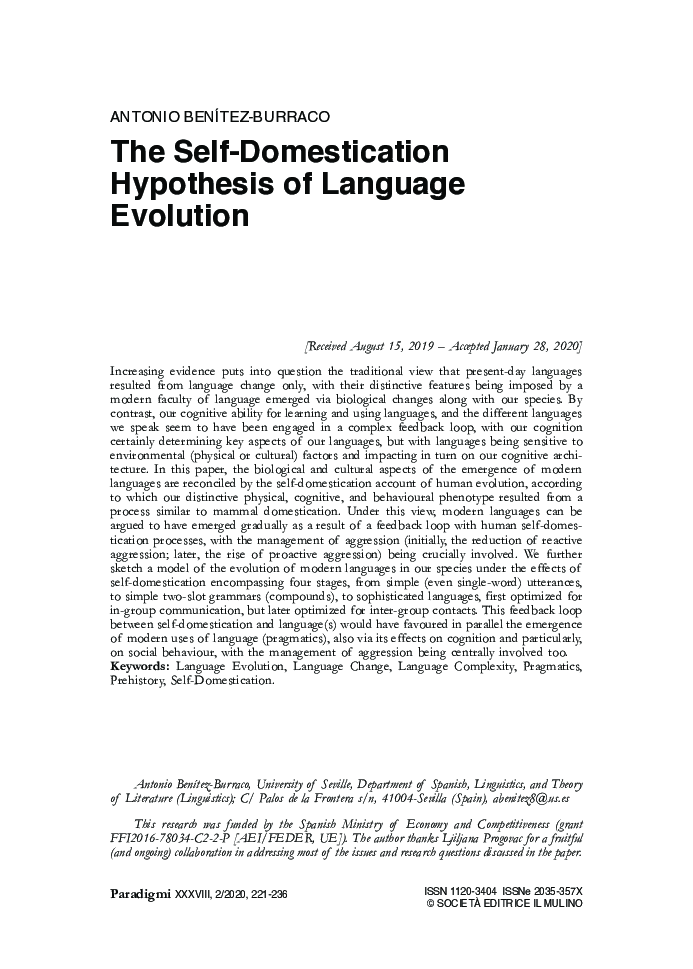