Leaders’ behaviour in the face of the COVID-19 crisis has attracted the attention of scholars and political analysts since the spread of the SARS-CoV-2 virus outside of China, where the disease manifested itself the first time. This contribution explores a particular aspect of crisis management in the Italian case: former Italian Prime Minister Giuseppe Conte’s meaning-making. Meaning-making is one of the tasks that the literature on crisis management assigns to political leaders confronting a crisis: in order to mobilize stakeholders and citizens and counter the uncertainty produced by the crisis, they must formulate a persuasive message that explains what has happened and why, what its repercussions are, how it can be resolved. At the same time, meaning-making can also repair, protect or enhance the reputation and consensus of leaders and governments. This essay explores Giuseppe Conte’s meaning-making through the content analysis of the speeches he gave during the press conferences held between January 31 and June 3, 2020. The findings show the high level of personalization of Conte’s communication and the considerable presence in his speeches of persuasive messages and manipulative linguistic devices. In the concluding section of the article, results are interpreted in light of two hypotheses. The first one is that Giuseppe Conte’s meaning-making overall aims at narrating a sweetened reality, which puts the government and its leader in a positive light. The second one that this sweetened reality is functional to his leadership strengthening 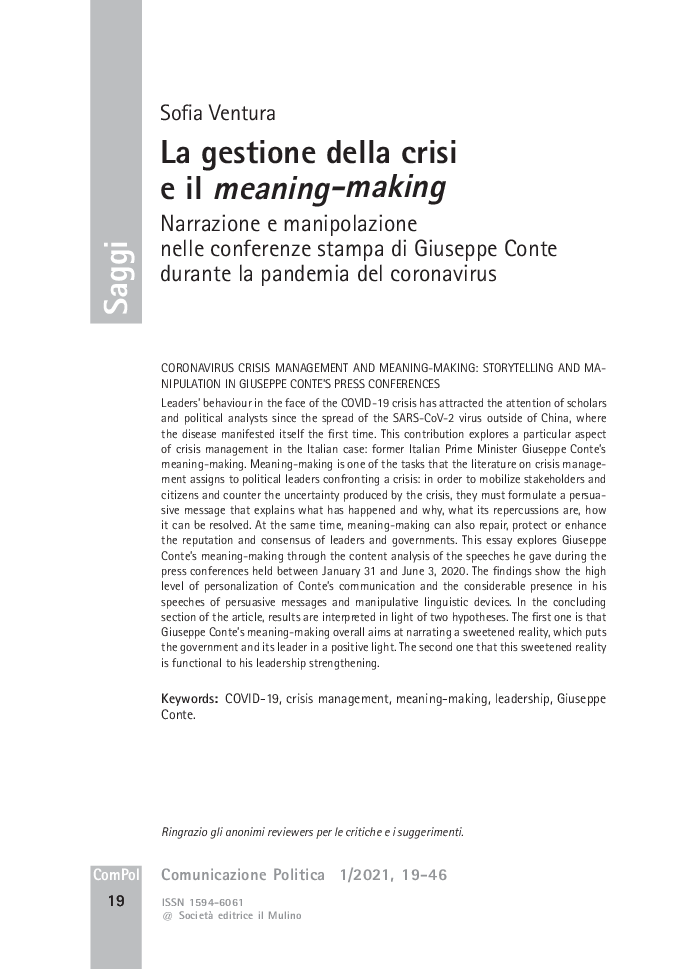