The Commission Proposal for a «Regulation on a Common European Sales Law (CESL)» does not provide an exhaustive individuation and description of the possible grounds of invalidity or ineffectiveness of sales contracts and contract terms. As a matter of fact, an almost complete set of rules may be found solely with respect to the avoidability of contracts (or contracts clauses) vitiated by mistake, fraud, threats or unfair exploitation. The paper analyses some of the most widely discussed issues relating to the invalidity of contracts and contract clauses, as may result from the breach of the limits imposed by the CESL on the freedom of the parties to determine the contents of contract clauses. The paper contains a systematic analysis of some of the most complex and discussed items of the invalidity of contracts and contract clauses, with a particular consideration of: «not binding» terms, clauses that exclude the application of mandatory rules or derogate from or vary their effects, conditions of validity of the clauses of sales contracts concerning the characteristics, qualities and performance capabilities of the goods, and terms in commercial transactions relating to the time or period of payment of the price and to the consequences of the late payment of the price. Against the backdrop of the principle of systemic coherence, the paper suggests that a better coordination should be ensured between the current contents of the proposal and, inter alia, Directives 93/13/EEC, 2005/29/EC and 2011/7/EU. The case is equally made for the CESL to incorporate and «codify» the solutions adopted by the European Court of Justice regarding the preceding topics, as a means to build up a fully coherent regulation of the European Sales Law. 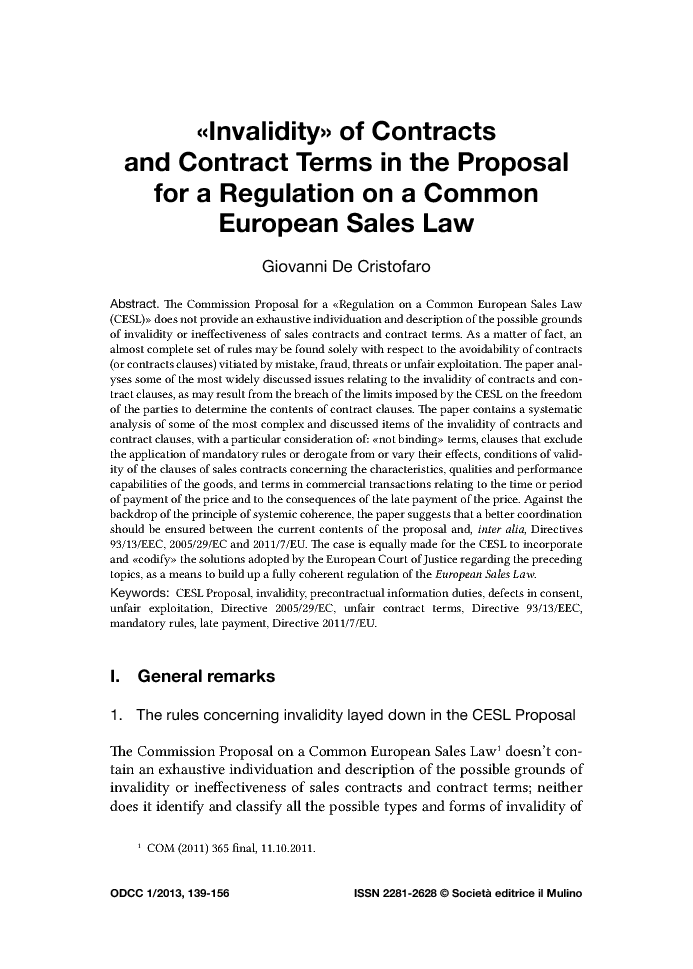