The story of Nongqawuse - a young Xhosa prophetess who in 1856 claimed to be the bearer of a message from the ancestors - was told and re-told orally in the Eastern Cape, South Africa, throughout the nineteenth and the twentieth centuries. The Xhosa population were to slaughter their cattle and burn their crops to see the prophecy fulfilled: the ancestors were expected to rise from the dead, to bring with them new, uncontaminated corn and cattle, and to drive the colonial usurper into the sea. The story activated the imaginative and creative energy of twentieth-century writers, to the point of being revisited several times and adapted to different literary genres (plays, poetry, short stories, novels, and films). In this essay, I discuss three narrative retellings of Nongqawuse's story: Zakes Mda's "The Heart of Redness" (2000), Sindiwe Magona's "Mother to Mother" (1998), and Mtutuzeli Matshoba's "Three Days in the Land of a Dying Illusion" (1979). My purpose is to highlight the quality of literary inventiveness and technical experimentation that the dialogue, with a deeply suggestive historical past, is able to bestow on contemporary narratives - also on a kind of fiction, like Matshoba's, traditionally considered more documentary and didactic than literary and imaginative. 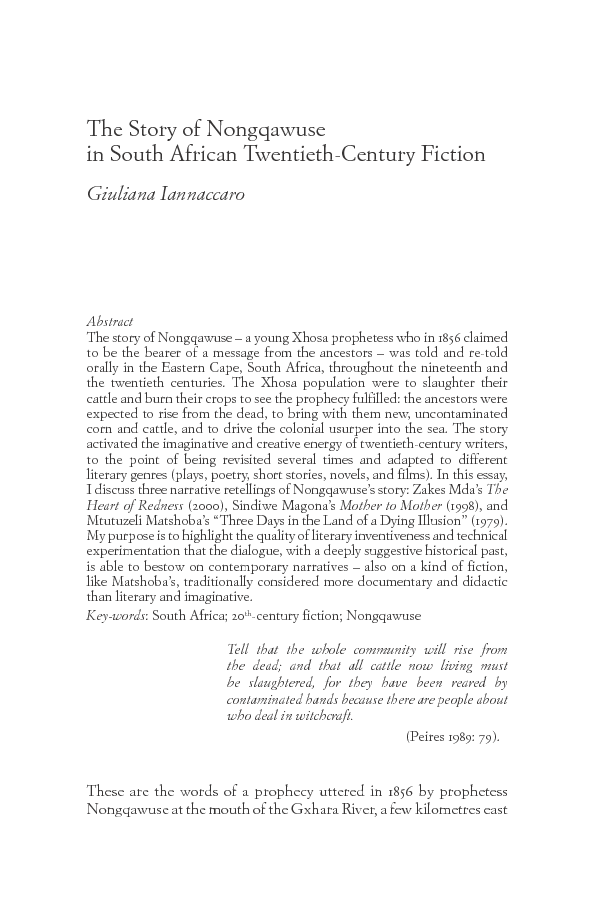