This article draws inspiration from the Greek statue known as "The Dancing Satyr". The analysis focuses on the wild hybridity of the mythological Satyr and of its "companions" (Faunus, Pan, Silenus, Bacchus, the Bacchantes) that have become icons of subversive pleasure. Going back to the Greek juxtaposition of mind/reason and body/desire, the essay questions the seductive flow of wild ecstasy that the figure of the Satyr and its "Court" continue to emanate up to the modern revisitations of our culture which conceives the self as centred on rationality. Referring to cross-cultural 19th-century and contemporary re-elaborations of this figure (J. Keats, C. Kingsley, R. Kipling, G. Del Toro's script for "El Laberinto del Fauno", D. Greig's Bacchae), while emphasising the fascinating effects of that wildness, even in its violent tragic forms, the article stresses the kind of bliss that springs from the Satyr's fertile hybridity. The echoes of this wild ecstasy continue to radiate through the centuries, from the Hellenistic culture to the modern literary and artistic reworkings, even with political implications. The analysis thus interrogates the permanence up to our days of the mythical fascination with the very ambiguity both of the Satyr and the Bacchantes, in spite of the moralistic rearticulations in Christian gothic imagery and of neoconservative patriarchal retellings. 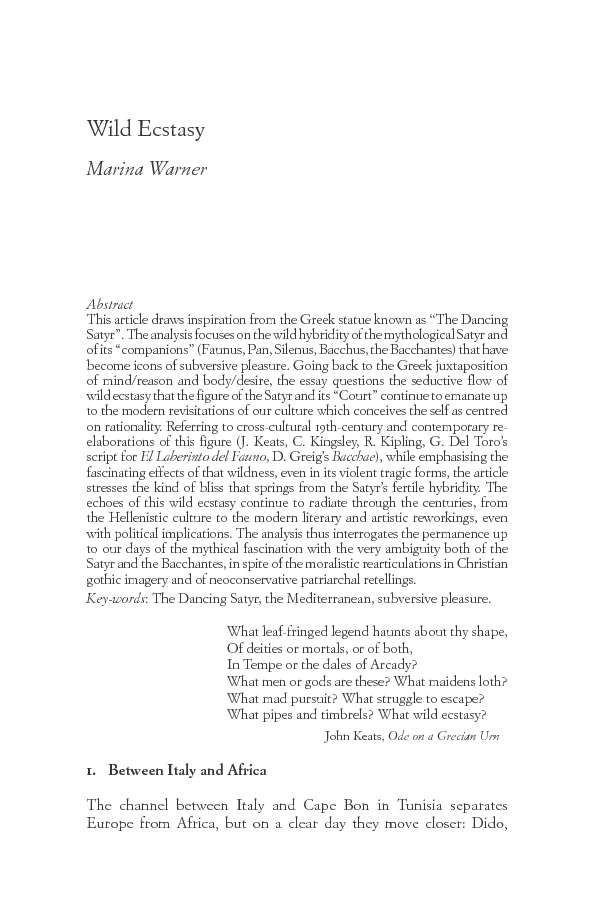