C.J. Sansom, a British historic crime novelist, utilises his protagonist, Matthew Shardlake, a sixteenth-century Lincoln's Inn lawyer, to critique the ways that Henry VIII's administration began to rigidly define various social and cultural 'norms'. Throughout the series, Sansom explores diverse groups of people who become marginalised and subsequently demonised by the quickly changing political landscape. As Henry VIII became more obsessed with producing a male heir to the throne, we see the establishment of a legal system that veers away from the purview of the Roman Catholic Church and the confessional to the criminalisation of Catholics, political dissenters, and sodomites, to name a few. Shardlake, himself, is consistently marginalised: he is a perennial bachelor who has a hunched back and is ridiculed for his disability; he originally works for Cromwell and Henry VIII to rid England of Catholics, and yet he also realises that the Reform movement is equally dangerous and dogmatic. Shardlake builds a community of 'freaks' around himself: his best friend is a homosexual ex-Catholic monk who is a Moor; his work colleague and friend is Jewish and working-class; Shardlake advocates for women's rights. With Shardlake, Sansom has devised an unexpected hero who creates safe spaces for Tudor society's 'rejects' wherever he goes. Sansom's fifth book in the series, Heartstone (2010), continues in this vein as it reveals the sham of carefully constructed notions of militarism, nationalism and their dependence on a rigidly defined gender dichotomy. Through the character of Hugh Curteys, a transmasculine figure, the reader must not only re-examine Henry VIII's codification of gender and sexual "norms", but we must also reconsider the ways that these laws and the subsequent stereotypes that have come with them continue to marginalise and criminalise queer people in the 21st Century. 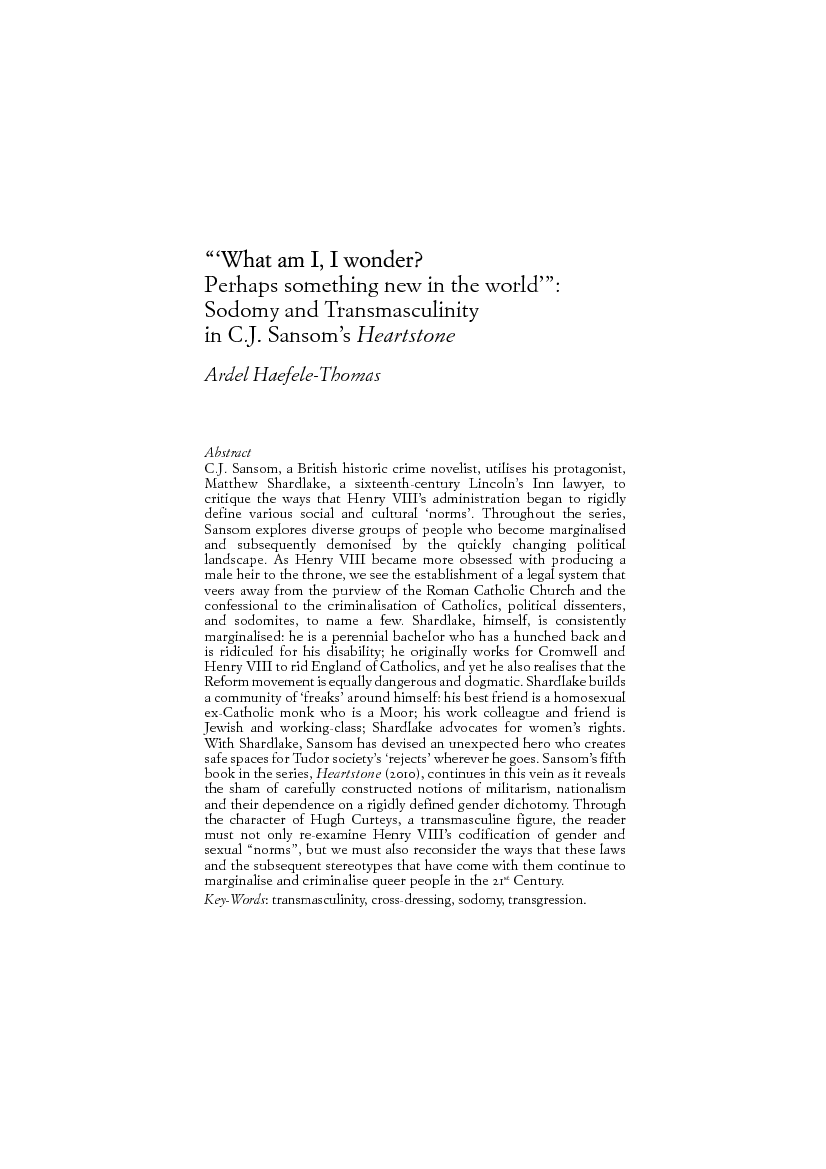