In 1894, the Parliament of liberal Italy repeatedly faced, as had never occurred since Unification, the problem of the distribution of landed property. Historiography has on several occasions focused on Crispi's important initiative, which took shape in the well-known bill "Enfiteusi dei beni degli enti morali e sui miglioramenti dei latifondi dei privati nelle provincie siciliane". But this did not take place in isolation. Through research conducted mainly in the archives of Parliament, as well as Boselli, Chimirri, Ferraris, Marcora, Pandolfi, Rinaldi, and Socci, this paper documents how the bills that were presented aimed at impairing the structure of landed property and/or the power of landlords. Like the "Crispina", these initiatives, too, were unsuccessful. Their importance, however, is considerable. The lack of legislation signals the (irreversible) crisis of the authoritativeness of landed property, and shows that within the state's central institutions, starting from the age of Crispi, there was a certain impatience with - and sometimes even an aversion to - the sacredness of the owner and the untouchability of his farm. Certainly, among parliamentarians and men of government, there was no ambition for agrarian revolution, but among some there was an awareness that the liberal system was too unbalanced, and had to be rebalanced through legislation that would courageously impose duties, responsibilities, and limits upon the capitalist. 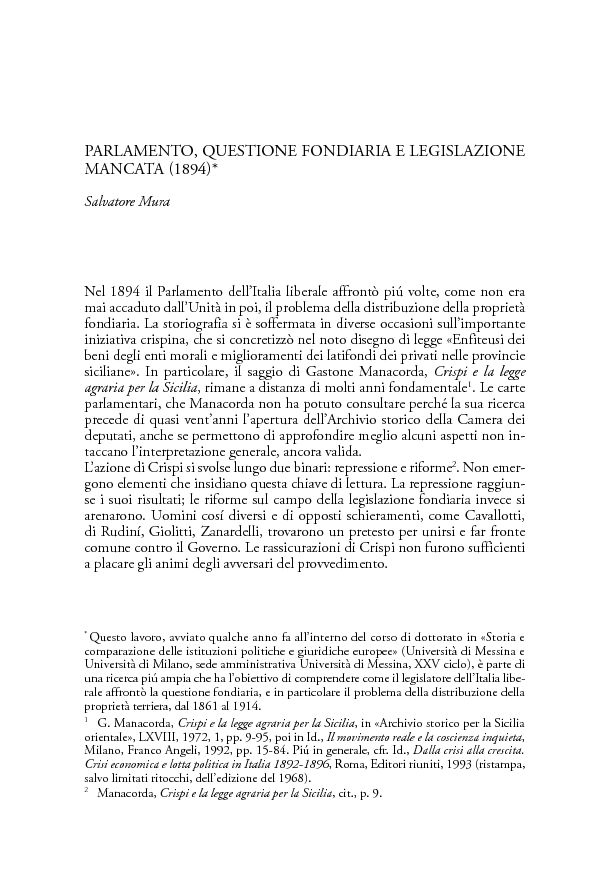