In chapters 13-19 of Book I of "peri mousikes", Aristide Quintilianus (III-IV century A.D.) explains rhythm. From the comparative analysis of ancient sources (Greek and Latin) and in the light of the opinions of philologists and musicologists expert in the musical theory of antiquity, it seems possible to confirme that Aristoxenus's "Elements of Rhythm" was the principal source. Differences also emerge in respect to this model, evident in AQ's admission of the simple "proceleusmatico", of the "epitrito" genre and in the nod to the operative modality of the "chorizontes", with references to stylistic criticism. Nevertheless, the "ethos" is the most noteworthy and interesting departure of AQ's treatment of the rhythmic argument. It emerges occasionally during the exposition of rhythm, as in I, 14, on round and surplus rhythms, and most fully in I, 18-19. The aim appears clear in II, 15, where it is said explicitly that rhythm serve a therapeutic goal: in fact, AQ underlines repearedly his predilection for long bears, owing to the beneficial effect they induce on the human soul. Such a tendency couples with the objective of the "solmisazione", explained in II, 14, and accompanied by the mention of Damone. It is also surprising that the therapeutic purpose is pursued with a care that bases its active principles in stylistic criticism: you can recover with an appropriated administration of rhetorical figures to find mainly in homeric verses, as evident in II, 9 (pp. 68, 22-69, 8). A renewed interest in this topic is demonstradet by a recent article by A. Barker, "Shifting in Ancient Theories of Metaphor", Proceedings of the Cambridge Philological Society, 45, 1999, pp. 1-16. The references to AQ's text are based on the magistral critical edition of Winnington-Ingram, published by "Biblioteca Greca Teubneriana" (Leipzig, 1963). 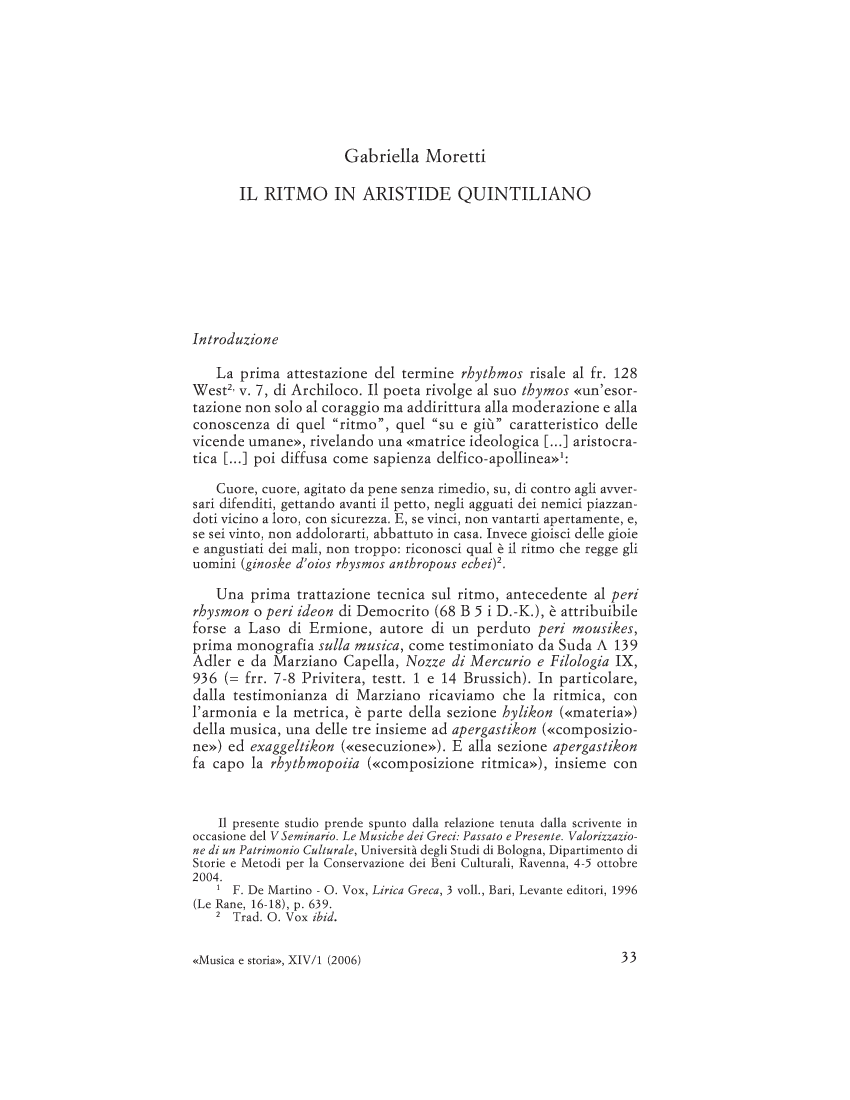