In the late 11th /early 12th century Pistoia was a flourishing centre for the production of tropes and has consequently attracted increasing attention from scholars. This essay looks at the main extant evidence of that work: the troper that constitutes the first part of the composite manuscript C121 (Pst 121) in the Archivio Capitolare of Pistoia Cathedral. For the first time systematically inventoried and catalogued (see appendices), the contents of the troper are seen in relation to those of two other extant documents, the well-known manuscripts C119 and C120 from the same Archive (Pst 119 and Pst 120), with which it seems to form a coherent whole and which in all probability were produced within the same circle. The five codex components reunited in the three manuscripts have various features in common and seem to be complementary to each other. The recent hypothesis that this group of manuscripts dates from the time when Hildebrand was Bishop of Pistoia (1105-1131) - a period when the Chapter of the Cathedral of San Zenone achieved particular levels of power and independence - is considered and examined. The general characteristics and some specific (sanctoral) features of the repertoire in the three manuscripts would seem to support the claim. Other evidence taken into consideration is the fragment 622.27 in the Archive of the History Institute in St. Petersburg (SpA27). However, doubts are raised regarding its recent attribution to Pistoian circles. The essay then examines in detail the repertoire of tropes in Pst121, looking also at the fragment now in the library of Rodrigo de Zayas in Seville (SeZ2). Particular attention is focussed on the introit tropes which make up the largest single part of the manuscript (and of Italian tropers in general). The analysis brings to light the large number of original re-workings of features taken from abroad (particularly, France), and the considerable similarities with two important collections of tropes from in Central-Northern Italy (the Volterra troper Vol 39, dating from the second half of the 11th century, and the gradual-troper RoA 123 in Bologna, c.1029-1039). The last aspect of the concordance and comparison of the various versions concerns the relation between Pst 121 and the traditions that existed in Southern Italy. Here, one work that stands out is the "Gentis linguae", whose importance in the context of Pst 121 is clear from the fact it was intended for the celebrations of the feast day of the patron saint, San Zeno. The piece is to be found only in Pst 121 and in two manuscripts in Benevento. The parallel with the phenomenon of 'acclimatization' that Planchart notes with regard to the piece "Mulieres quae ad sepulchrum" suggests that the work was actually written in the Benevento area. "Gentis linguae" would therefore provide further evidence of the passage of melodies from South to North Italy, and at the same time confirm the central role of Pst 121 in this phenomenon. 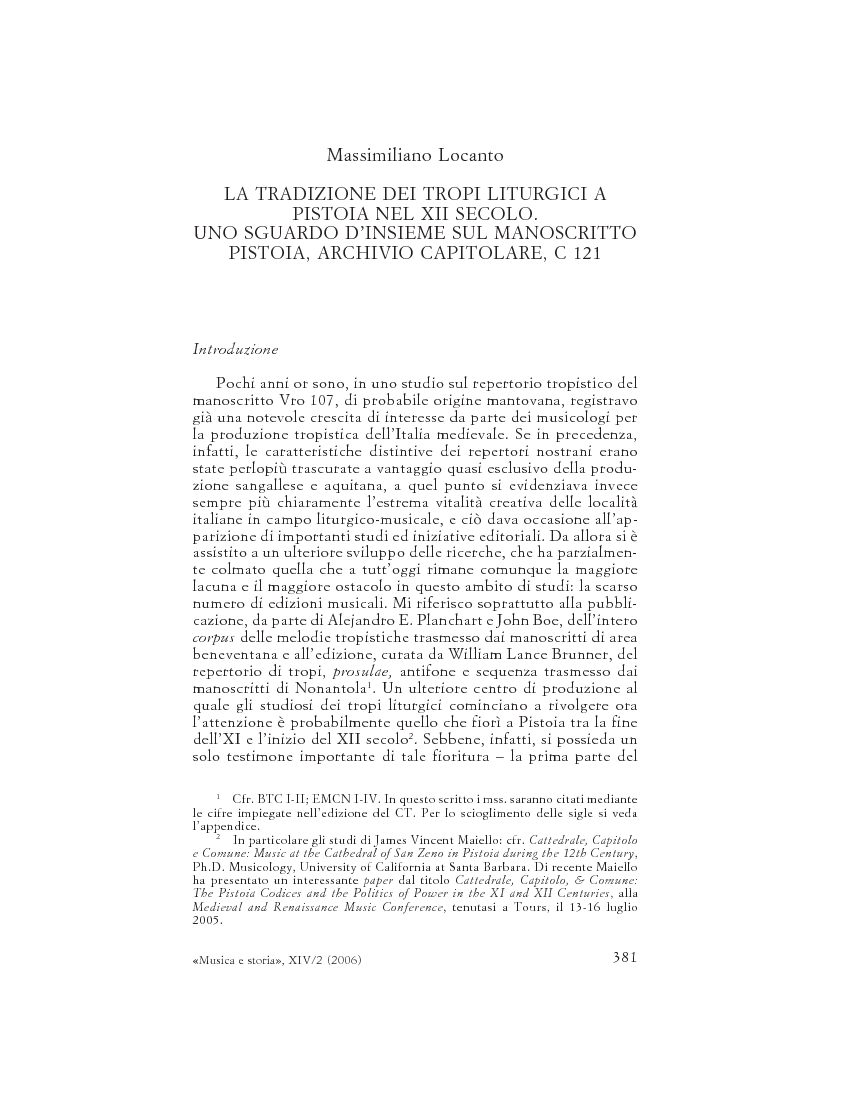