The origin of the Botanic Garden of Bologna is strictly connected with the early development of Botany in Italy. Indeed, ever since the sixteenth century, the University of Bologna was one of the main centres of botanical knowledge. Luca Ghini was the first to hold the chair of Botany, and one of his pupils, Ulisse Aldrovandi, obtained from the Senate the permission to create in 1568 the Botanic Garden, which he himself directed for 38 years. The original site of the Botanic Garden was in the city centre, in the courtyard of the Public Palace near the hall where Aldrovandi gave his lectures. Aldrovandi’s garden included many exotic specimens collected by him or obtained from correspondents. The courtyard of the Public Palace soon became inadequate to host such a collection, and in 1587 the Garden was transferred to a larger site named «Borghetto San Giuliano» near porta Santo Stefano. There, in 1745, a «hybernaculum» was built in which exotic plants were kept during the coldest months of the year. The establishment of a special exotic section reflected both the new tasks assigned to botanic gardens and the new physiognomy they came to have during the 18th century. Finally, in 1803-1804 Giosué Scannagatta established a new site for the Botanic Garden in a larger area, which was also the nucleus of the new University area. Under his direction, the Botanic Garden of Bologna finally came to occupy the site that, more than two centuries later, it still occupies today. The Botanic Garden in total covers two hectares and is bounded to the north by the old city walls and to the south by via Irnerio. There are approximately 5,000 different plants – local and exotic – growing here, including thematic collections, reconstruction of natural habitats, two greenhouses with tropical and succulent plants and a small greenhouse with a collection of carnivorous plants. Collections of dried plants, dating from the 16th century onward, are preserved at the Herbarium. Collectively, the Herbarium holds approximately 100,000 botanical specimens from across all taxonomic groups and geographic regions. 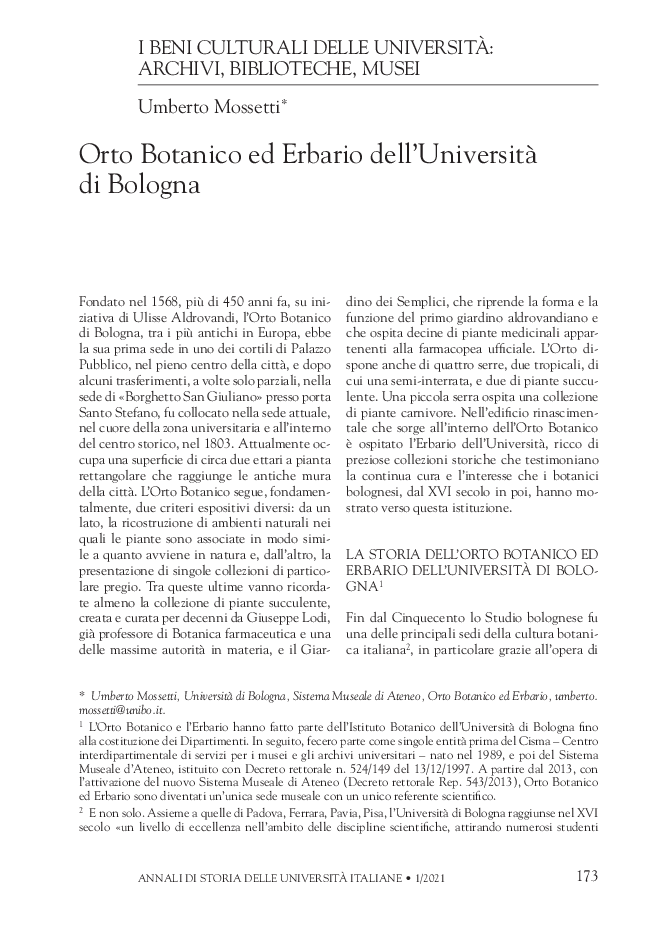