In the years prior to the return of the Holy See from Avignon to Rome, the brother of pope Urban V, cardinal Anglic Grimoard de Grisac, was appointed vicar and papal legate to the Marches, Romagna, Umbria and Tuscany in 1368. With the pope’s death, Anglic lost his sole support and resigned before being removed. In an attempt to prove the success of his time in office, in the autumn of 1371 he put together series of assessments and advice addressed personally to his designated successor (the Præcepta) as well as having reports compiled that might also prove useful and serve as detailed critical knowledge of the situations of the administered areas (the Descriptiones). With the findings of the Descriptio civitatis Bononie eiusque comitatus as its starting point, the paper focusses on the salaries awarded by communes to Studium professors in canon and civil law, medicine and the arts. By conducting a comparative study with the spending borne by the same institution for other salaried staff, the data demonstrates how teaching salaries provided a comfortable and prosperous lifestyle. However, as it also appears from the table in the appendix, professors’ salaries reported in the Descriptio varied considerably, with even greater disparities between cities and in relation to the value attributed to the subject taught (from tens of florins per year to over a hundred or more for professors in law), and commensurate with a professor’s standing. The paper also examines the period following the rebellion against Church vicars in 1376 and the removal of the papal legate, when Studium professors reappropriated a political vacuum and reconfirmed their unquestioned status through their active participation alongside exponents of the Bolognese families that attempted to rebuild an aristocratic regime. 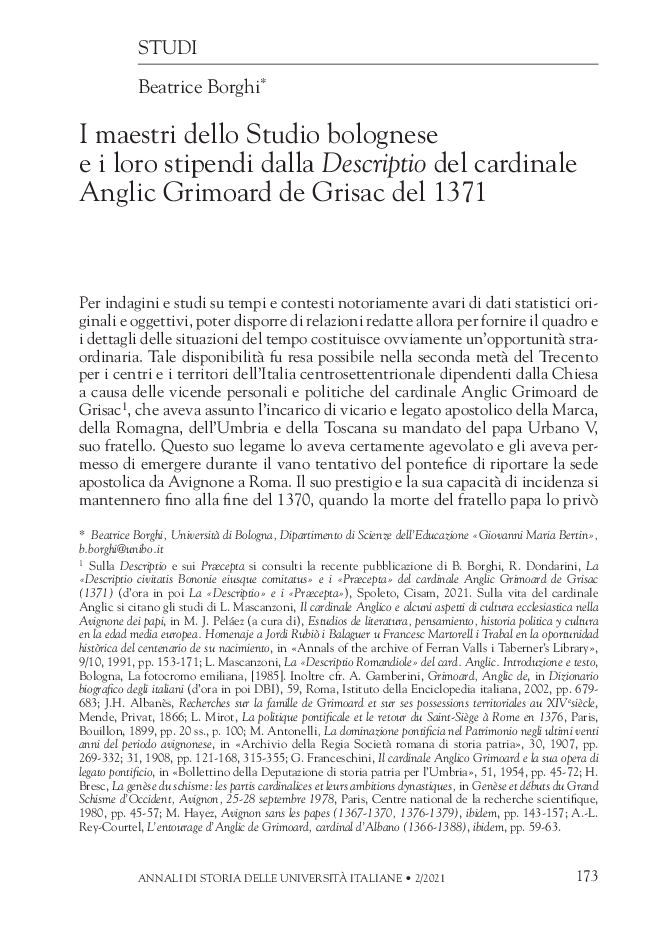