The essay critically discusses the graduation report of Roderigo Lopez, a Portuguese student proclaimed artium et medicinae doctor at the Paduan Studium in 1559. The meticulous analysis of the document and the reconstruction of the social, political, scientific and academic context of the time, allows us to recognize a celebrity of the 16th century in the Lusitanian student Roger Lopez (1517/1525-1594). He was personal physician of Elizabeth I of England and an important intermediary between the last court of the Tudors, Portugal and Spain of Philip II; he was finally sentenced to death by quartering. Shakespearean scholars believe that the poet was inspired by Lopez personal tragedy to outline the figure of Shylock, the Jew of the Merchant of Venice (about 1596-1598). The article proposes the thesis according to which the Paduan student is the future Elizabethan doctor, as many biographical information and some aspects of the English literary masterpiece seem to confirm. This would finally explain what prompted the Portuguese to move to England, how he was able to make such a prestigious career and to enjoy such a vast credit at court, and why he was executed. That was a complex story in which Francis Walsingham’s stay in Padua and Lopez’s real adherence to Judaism could have played a decisive role. The true archetype of Shylock could therefore have been a «Paduan» doctor. 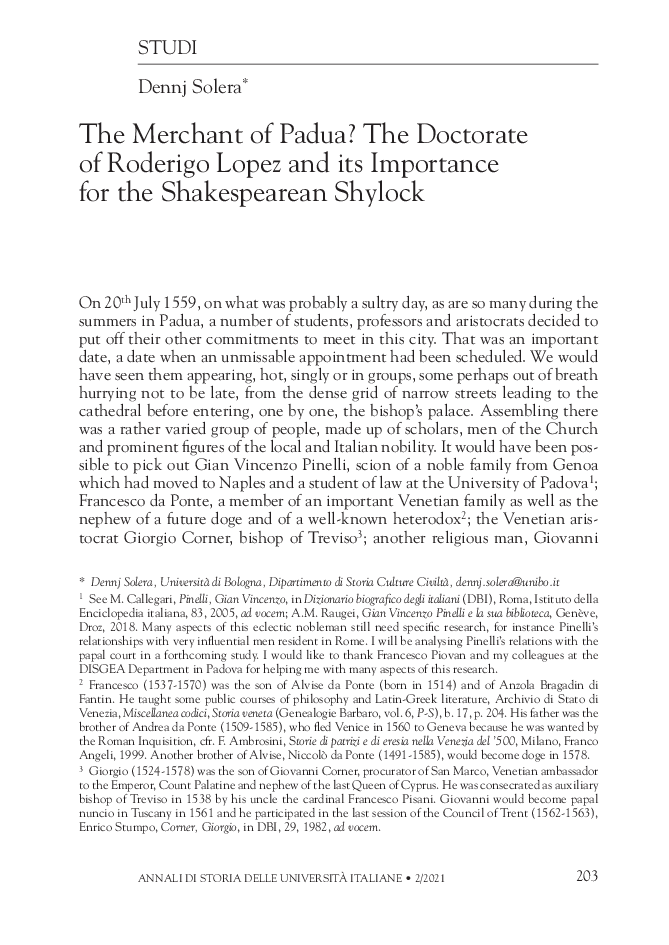